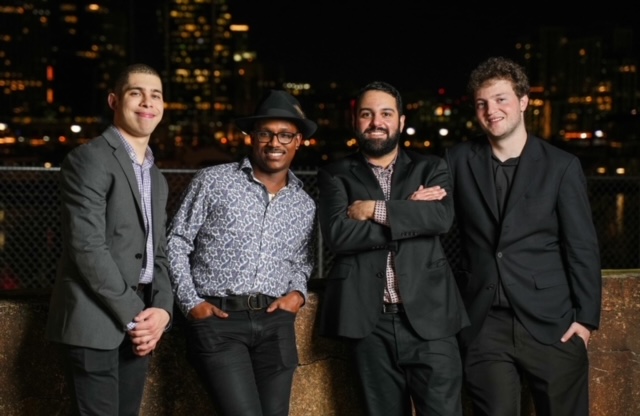 Julian Berkowitz is a drummer and educator residing in Washington, DC. Rooted in the deep tradition of American jazz, fusion, funk, and the rhythms of Brazil, Julian has quickly become one of the DC area’s most in-demand drummers. The son of a Jewish-American father and Brazilian mother, Julian was born and raised in the small town of Easton, Connecticut. His first experience with the drums began at the age of 5, when he discovered the pots and pans in the kitchen doubled as a makeshift drum kit. In sixth grade, middle school band director and drummer Robert LaValle noticed Julian’s talent
on the drums and became his first drum instructor, introducing him to funk and jazz music for the first time.
Upon moving to Washington, DC in 2013 to attend The George Washington University, Julian was fortunate to study jazz with virtuoso Brazilian drummer Alejandro Lucini. Lucini’s mentorship was crucial in Julian’s development in both the straight-ahead jazz and Brazilian/Latin jazz spheres. Julian graduated from GWU in 2017 and began to
explore the D.C. jazz scene.
Julian has performed and/or recorded with musicians such as Benny Benack III, Chuck Redd, Corcoran Holt, Mike Pope, Bill Heid, Herman Burney, Tedd Baker, Thad Wilson, Herb Scott, Alex Tremblay, Dominique Bianco, and Todd Simon. Additionally, Julian played with international artist Michel Nirenberg on his 2017 and 2018 U.S. tours and
accompanied smooth Latin jazz artist Debora Galan on her 2019 East Coast tour.
Julian has performed at a number of venues in the DC metro area, including Blues Alley, Rams Head on Stage, Alice’s Jazz and Cultural Society, Twins Jazz, An Die Musik Live, Avalon Theatre, Jojo, and 49 West.
As a bandleader, Julian frequently performs with the Julian Berkowitz Trio at various music venues in the DMV area. Currently, Julian has a weekly Friday night residency with his trio at Right Proper Brewing’s Brookland Production House. You can often find him performing at Green Island Cafe in Adams Morgan where he leads a weekly jam
session with his trio every Thursday night. He also leads a jam session at Library Tavern every Sunday night.
As an educator, Julian teaches private drum lessons in both DC and Virginia; he’s currently on staff as the drum instructor at Capitol Hill Day School in Washington, DC.