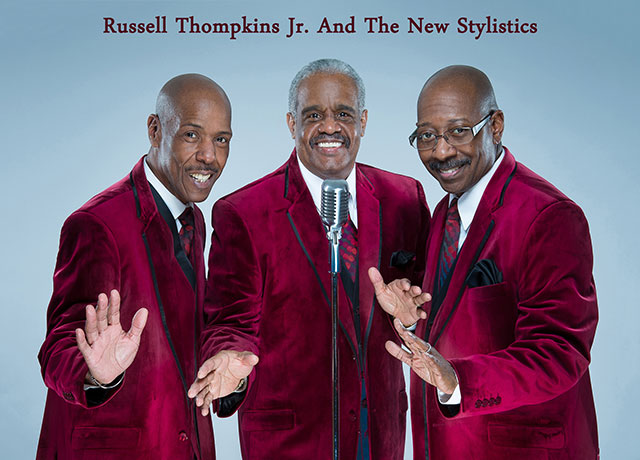 Russell Thompkins Jr. & The New Stylistics are celebrating 16 years of performing the original music of The Stylistics. For more than 30 years, Thompkins was the original lead singer of The Stylistics with his impeccable falsetto that led the group to international fame and recognition. They recorded numerous classic hits including “You Are Everything”, “Betcha By Golly Wow”, “Stop, Look, Listen (To Your Heart)”, “You Make Me Feel Brand New”, “Break Up To Make Up”, “I'm Stone In Love With You”, “People Make The World Go Round” and many more. Along with former Stylistic Raymond Johnson and another Philadelphia native Jonathan Buckson, Russell Thompkins Jr. & The New Stylistics are committed to delivering high quality vocal performances on stage in a professional and masterful style. Thompkins brings an unparalleled level of talent, dedication and professionalism to every performance. His major goal and mission is to provide his loyal fans, friends and supporters with the same quality of music that they have come to know and love.

Eddie Holman is an extraordinary vocalist with an unforgettable falsetto featured on his smash hit "Hey There Lonely Girl”, one of the most cherished love songs ever recorded with beautiful singing and memorable lyrics that touch the soul. Holman was born in Norfolk, Virginia and raised in New York City where he displayed his singing talent at an early age by winning Amateur Night at the Apollo Theater at age 10. Later moving to Philadelphia, he sang with The Stylistics and The Delfonics as well as succeeding as a solo artist with several other hits before he struck gold with “Hey There Lonely Girl” peaking at #2 on the Billboard Hot 100 chart and selling over one million copies.