The Golden Gays NYC present "Thank Yule for Being a Friend" 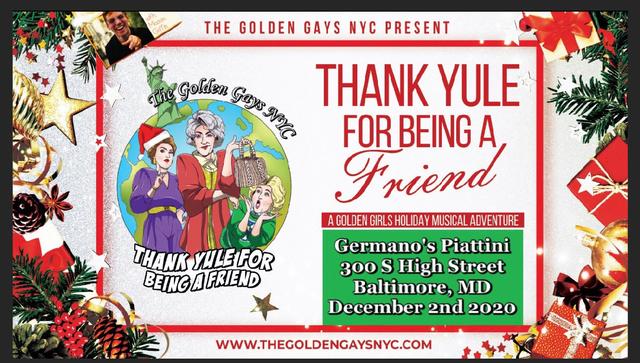 “It’s like vaudeville for the new generation!” - Rachel in Asbury Park, NJ

“They had me laughing so hard my cheeks hurt!” - Mary in Fort Lauderdale, FL

“The best show I’ve seen here in a long time.  More of this, please!” - Michael in Detroit, MI

As seen Off-Broadway and on the Golden Fans at Sea cruises!  The Golden Girls for the NEW generation.

‘Twas the night before Christmas and all through the store, each department was dripping with Yuletide decor.  Sophia was nestled all snug in her bed, while visions of sugar prunes danced in her head.  Before traveling to spend the Holidays with their families, Dorothy, Blanche, and Rose participate in a golden gift exchange full of hilarious surprises.  Just as they get to the airport a winter storm blows in, leaving them trapped!  In an unexpected Charles Dickens twist of events, the three grannies must visit their past, present, and future to save Christmas (and find Sophia)...just in time for turkey lurkey.  Lucky audience members may even have a chance to make their stage debut and become the next #TokenSophia!

$35 VIP - Includes premium preferred seating, GGNYC swag, and an official #TokenSophia photo following the show with the cast starring YOU as Sophia!  We provide the wig, glasses, and handbag.  You provide the Sicilian attitude.

*Get your tickets early- Previous shows have sold out!

The upstairs dining room is arranged with tables and chairs facing an open performance space. Guests enjoy informal, engaging interaction with performers as they dine. The full PIATTINI menu is served in the Cabaret.  Doors open at 6:00pm for pre-show dining and the show will begin at 7:30pm.

The Golden Gays NYC have quickly emerged as the premier Golden Girls show in the country.  The perfect drag show for the whole family!  GGNYC for short, they burst onto the scene in 2017- first at RuPaul’s DragCon NYC, then at the famed Rue La Rue Café, where their trivia show video went viral.   What began as a flash mob has now skyrocketed to sold-out engagements all across America.  GGNYC has produced multiple successful tours, each one growing larger, with their hit musical shows “Hot Flashbacks”, “The Golden Games”, and “Thank Yule For Being A Friend” to enthusiastic audiences in New York City, Asbury Park, Baltimore, Philadelphia, Pittsburgh, Atlantic City, Cleveland, Detroit, Chicago, Indianapolis, Provincetown, Dallas, Fort Lauderdale, Minneapolis, Rochester, New Hope (PA), Cumberland (MD), and Hackensack (NJ).  “Hot Flashbacks' premiered Off-Broadway at NYC’s Theatre Row in the summer of 2018. Each Fall, they participate in RuPaul’s DragCon NYC with their own GGNYC booth, meeting hundreds of new Golden fans each year.  They have sailed the high seas, first with Vacaya Travel’s inaugural P-Town cruise in August 2019, and the two back-to-back Golden Fans at Sea cruises in February/March 2020.

The Golden Gays NYC stars Jason B. Schmidt (as Dorothy), Andy Crosten (as Blanche), and Gerry Mastrolia (as Rose) along with Musical Director Mason Griffin.  Featuring musical staging by Anthony Giorgio-Schmidt and direction by Darlene Rae Heller.  A musical adventure, their shows consist of live singing and dancing, along with hilarious sketches from the television show's most memorable moments.