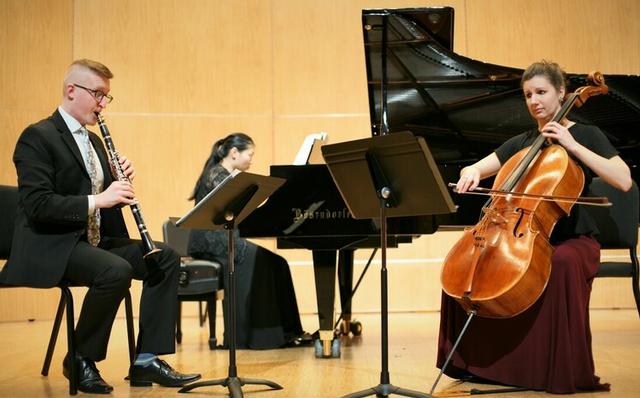 The Baltimore-based Ann Street Trio is devoted to performing chamber music from the classical era to the 21st century. Comprised of several of Baltimore’s finest musicians, the Ann Street Trio believes in engaging their audience through creative programming and conversation, and strives to give them an up-close look at the creativity and excitement of chamber music. The Ann Street Trio reaches audiences through chamber music series in the region, university engagements, and private salon concerts. With years of diverse performance experience, each member brings a particular expertise to their interpretation. Erik Franklin is a member of the U.S. Army Field Band (Ft. Meade, MD), Katlyn DeGraw is the Associate Principal Cellist of the Maryland Symphony Orchestra, and Hui-Chuan Chen performs recitals nationally and internationally alongside teaching at the University of Maryland, Baltimore County.

A native of Taiwan, pianist Hui-Chuan Chen began her piano studies at the age four and made her debut performance at six. As a successful soloist, chamber musician, collaborative pianist and educator, Hui-Chuan has traveled and performed widely throughout the United States, Europe and Asia.

Cellist Katlyn DeGraw is a seasoned performer with recent appearances around the globe, including concerts throughout the U.S., Canada, and Asia. In demand as an orchestral cellist, Ms. DeGraw is the Associate Principal Cellist of the Maryland Symphony, and appears frequently with the Richmond and Annapolis Symphonies. Additionally, she has performed with the Baltimore and Charleston Symphonies on numerous occasions.

Clarinetist Erik Franklin has given hundreds of concerts in nearly all fifty states, performing concerts in venues from veterans’ homes to Carnegie Hall. Equal parts performer and teacher, Mr. Franklin balances his time teaching as Adjunct Professor of Clarinet at Towson University and touring with the United States Army Field Band.