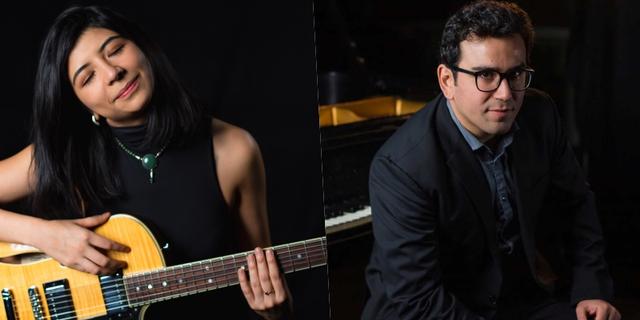 Jhoely Garay is a guitarist, composer, and arranger from Mexico City. She graduated with a Bachelor´s degree in Jazz Guitar Performance at The City College of New York in 2020, and is currently studying for her Master’s degree in Jazz Composition at Manhattan School of Music.

Garay is a four-time winner of the Latin Grammy Cultural Foundation scholarship and received the Austin and Florence Kaye Foundation Scholarship from 2017 to 2020. She was awarded the Portland Jazz Composers Ensemble Prize in 2020 and the Repsol Emerging Artist Award in 2017. She was selected to participate in the Woodshed Network Workshop in 2021, directed by NEA Jazz Master Dee Dee Bridgewater, and participated in the International Workshop for Jazz and Creative Music at The Banff Centre in Canada in 2017. She is a Latin Grammy Foundation Ambassador, a beneficiary of the Women in Jazz Organization Mentorship Program 2019, a grantee of the “Young Creators” program 2020 by the National Fund for Culture and the Arts in Mexico, and a grantee of the New York City Artist Corps.

Alec Castro is a Mexican pianist, composer, arranger, and educator. He began his professional studies in Mexico City in 2005, obtaining an Associate degree in Musical Production/Audio Engineering in 2008 at G Martell. From 2008 to 2010, After working as a professional musician, educator, he to New York where he earned his Bachelor’s degree in Jazz Piano Performance at The City College of New York, graduating with honors, in 2015. While studying at CCNY he received the Edward H. Rensin Memorial Award, Gershen Award, Adelaide Jablonsky Award, Hilda Holober award, and the Kaye Scholarship. He then completed his Master’s degree in Jazz Composition and Arranging at William Paterson University of New Jersey in 2018.

He has performed in important New York forums such as Dizzy's Coca Cola Club, Jazz at Lincoln Center, Minton's, Aaron Davis Hall, Shapeshifter Lab, Tutuma, Bonafide Club, and Trumpets. He has been a member of the BMI Jazz Composers Workshop since 2017.