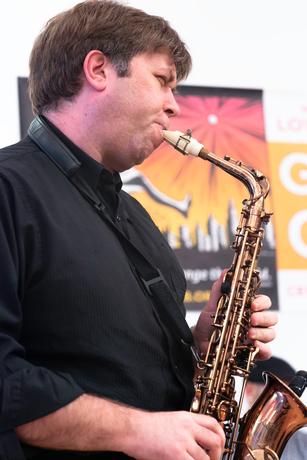 Zoho Music and Posi-Tone recording artist Travis Sullivan has earned a worldwide reputation as an alto saxophonist, pianist, composer, and arranger.  Embedded in the New York music scene for the past 25 years, he has been hailed by Jazz Times as being “…a gifted alto saxophonist and improviser who has also developed a strong and commanding voice as a composer.”

In 2004, his breakthrough came in the form of Travis Sullivan’s Bjorkestra, an 18-piece big band performing his arrangements of the renowned music of Icelandic pop goddess Bjork.  The Bjorkestra has acquired international recognition from performances with acclaimed jazz artists such as Dave Douglas, Kurt Rosenwinkel, and Donny McCaslin, and performances at the Montreal International Jazz Festival, the SF Jazz Festival, the Blue Note, and the Jazz Standard.