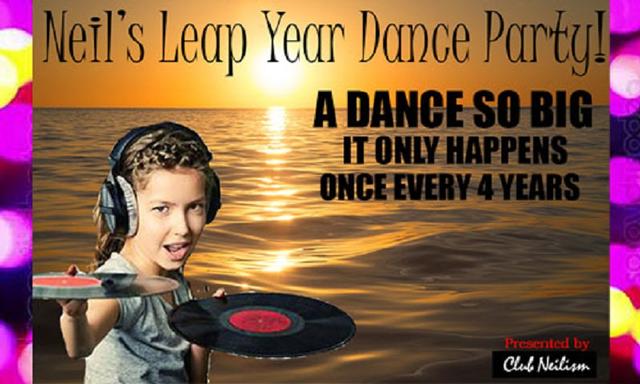 It was a dark and snowy night. You've been inside now since the day after it hit 70 degrees in early January.

All your SAD lamps are on, all the time. The last day of February is fast approaching and you feel vaguely hopeful. And it's the VERY last day - it's February 29, Leap Year Day!

Suddenly, you remember: THERE'S A DANCE SO BIG IT ONLY HAPPENS ONCE EVERY 4 YEARS: NEIL'S LEAP YEAR DANCE PARTY!

Shed the darkness - join us at Nighttown and do some leaping of your own! And dining, drinking and good conversation with friends and friends-to-be.

As a happy dancer said at the December party: Why isn't everyone our age here? Indeed.

A life-time resident of Cleveland Heights, Neil discovered Nighttown shortly after it opened in 1965. In the mid-seventies, he worked at Nighttown as a waiter, bartender, and host. Like many of his generation, Neil has had a long-time love affair with music and dancing, growing up during the golden age of popular music. In the mid-sixties, Neil was a dancer on the Big 5 TV Show, from which emerged the nationally syndicated Upbeat Show. He also has a sandwich named after him at Tommy’s Restaurant on Coventry (the ‘NS’ - falafel and baba ghanouj).