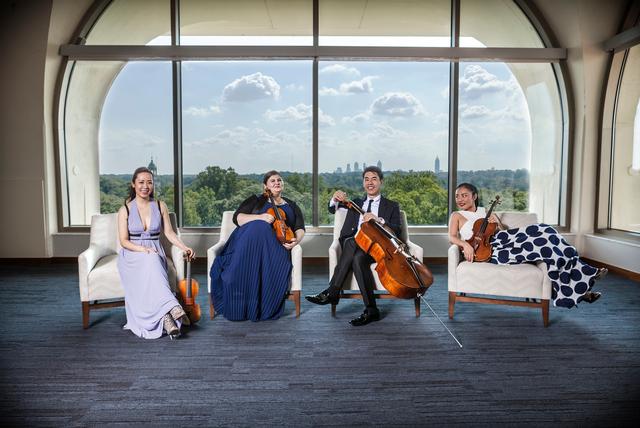 “The music, when it began, simply took over and created a space of its own. Nor did the quartet impose an interpretation on the music; rather, the musicians played with a deceptive simplicity and fluidity that made difficult passages seem childlike in their straightforwardness. ”

THE VEGA STRING QUARTET
What does VEGA mean?
The Vega star is one of the brightest in the Lyra constellation. According to Greek mythology, this constellation represents the lyre which belonged to the legendary musician Orpheus.
Members:
Elizabeth Fayette, violin, Jessica Shuang Wu, violin, Yinzi Kong, viola , Guang Wang, cello
Program:
Franz Joseph Haydn: Quartet Op. 1/1 (the first-string quartet ever written!)
David Garner- “I ain’t broke, but I’m badly bent”
Intermission
Ludwig van Beethoven: Quartet Op. 130 in Bb Major
The Vega String Quartet, Quartet-in-Residence at Emory University, is cultivating a new generation of chamber music lovers through dynamic performances and innovative community engagement.
The New York Times raved that "[the Quartet’s] playing had a kind of clean intoxication to it, pulling the listener along…the musicians took real risks in their music making" and the L.A. Times praised their “triumphant L.A. debut.” They concertize both nationally and internationally, most recently in Baltimore, Chicago, Nashville, Sacramento, Berlin, San Miguel, and the Brahmssaal in Vienna’s Musikverein.
The Quartet's major performing projects at Emory have included performing the complete cycle of Beethoven quartets, as well as pairing Bach’s complete works for solo violin, viola and cello with the six Bartók quartets.
They have also developed a series of “Jazz Meets Classics” programs, bringing the two genres together.
Recent highlights include the Quartet's debut at Amsterdam's famed Concertgebouw, a multi-city tour of Denmark, with performances at venues such as the Royal Danish Conservatory, and appearances at El Paso Pro Musica and the Sitka Music Festival.
A unique aspect of the Quartet’s residency at Emory is bringing performance into the classroom, collaborating with academic professors to create interdisciplinary parallels and conversations.
They also enrich the cultural life of their community, having founded the Emory Youth Chamber Music Program, which gives intensive training in small ensemble playing to advanced pre-college students.
The Quartet was appointed to the roster of the Woodruff Arts Center’s Young Audience program, engaging thousands of students throughout the greater Atlanta school system.