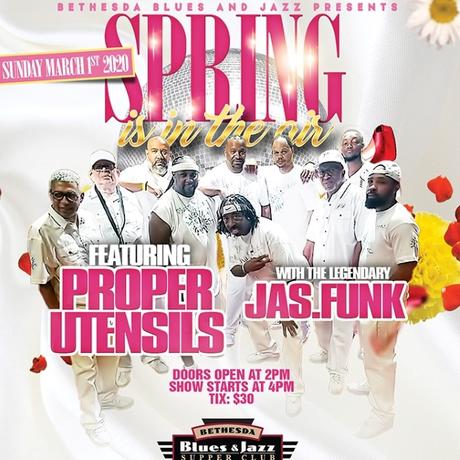 Spring is in the air for this day party featuring Proper Utensils with DC’s Living Go-Go Legend James “Jas.” Funk! Proper Utensils is one of the premier "Old School" Go-Go bands reminiscent of their mentor "The Godfather of Go-Go" Chuck Brown who along with his band the Soul Searchers were the originators of Go-Go music. Proper Utensils is a funky, jazzy, bluesy, creative dance band with seasoned veterans who have performed for decades. The dance floor will be open for this special day party featuring the very best in live Go-Go music!

This show is dedicated to Lloyd Pinchback, a longtime cherished member of Proper Utensils who recently passed away on February 8th. A supremely talented musician who played the saxophone and flute with special resonance, Pinchback was best known as "The Cowbell King" for his mastery on the cowbell which became an integral part of the Go-Go sound. Pinchback was also one of the original members of the Soul Searchers during their early years who was much admired and will be remembered by Go-Go fans everywhere!