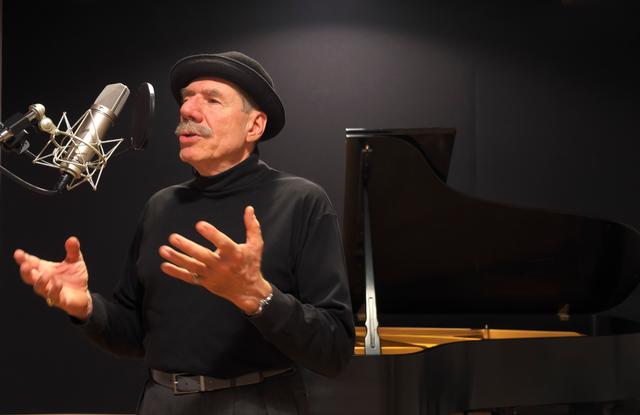 “Mr. Gates is a solid example of a performer who is doing something that no one else does. He evokes an age (that I would hope is not so terribly bygone) when musicians were entertainers and entertainers were musicians, and a sense of humor was as important as a sense of rhythm.”
— Will Friedwald

Giacomo Gates does more than sing “a bunch of songs.” He is truly an entertainer, for all ages and styles, as audiences enjoy the music, the interaction on the bandstand between him and his musicians, the spontaneity, the humor, the stories about the music and composers, along with their relation to everyday life. People are smiling, having a good time, while thoroughly enjoying the music. What usually lacks in most of today’s performances is obviously present … fun!

The criteria for defining jazz singing will probably be argued for the rest of time. But no matter which side of the argument one may be on, there can be no doubt that Giacomo Gates is an authentic jazz vocalist. Heavily steeped in the traditions of the original vocal improvisers from Louis Armstrong and Ella Fitzgerald through their modern counterparts Betty Carter and Leon Thomas, Giacomo’s own approach draws most heavily from the bebop-rooted masters like Jon Hendricks, Babs Gonzales, King Pleasure and most of all, Eddie Jefferson. Like his influences, Gates has forged his own unique path.

In his own words, “In this kind of music it’s about intention, honesty and what comes through in your voice – the Experience of Life.” Without question, Giacomo’s life experience is unlike any other jazz artist that may come to mind. Blessed with a full-bodied and mellifluous voice, extraordinary rhythmic precision and an unerring sense of lyricism, Gates’ total command of the vernacular, boundless creativity and exuberant passion set him apart from nearly every other vocalist on the scene. However, he didn’t display his talents to the public-at-large until 1990, at 40 years of age. Prior to that, Gates led the life of a hardworking blue collar ‘man’s man.’ After a number of years driving everything from school buses to cattle transporters to 18-wheelers, Giacomo departed for the Alaskan wilderness in 1975, working for 14 years in a variety of jobs, including three years on the Alaska Pipeline. Whether he was doing road construction, operating scrapers, loaders and bulldozers, or driving spikes into railway tracks in the flatland emptiness of the tundra with no directional guides other than a compass and the sky, Gates found these experiences to be powerful stimulation for developing his own artistic expression.

“Two things always struck me out there,” Giacomo says of that experience, “feeling insignificant and feeling very alive.” With severe risk to life and limb from all sorts of dangers ranging from geographic disorientation to heavy machinery accidents to hungry polar bears, Gates was confronted with sights, sounds and experiences that had a profound effect upon his being, and therefore his art.

Like his mentors, Gates would sometimes translate great instrumental solos into Vocalese, including the works of Lee Morgan, Chet Baker, Gene Ammons, Charlie Rouse and many others, also penning lyrics to classic jazz compositions. In citing his influences, Giacomo states “Some of my favorite singers are Dexter Gordon, Ben Webster and Lester Young. They were singing through the horn. If that isn’t singing, I don’t know what is!”

Gates has eight heavily acclaimed CDs, all charting in the Top 20, with two #1 recordings, for six and four weeks! The most recent release in April 2017, “What Time is it?” on Savant Records (his 4th on Savant), garnering rave reviews and receiving heavy airplay and reaching number 8 on the national jazz radio charts.