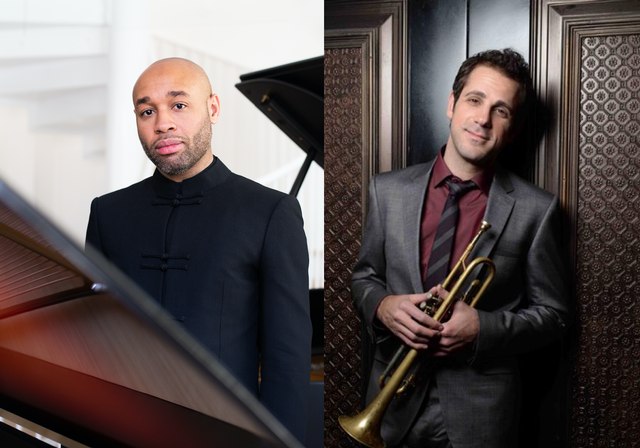 Aaron Diehl: Following three critically-acclaimed leader albums, the American Pianist Association’s 2011 Cole Porter fellow now focuses his attention on what it means to be authentic, to be present within himself. His most recent release on Mack Avenue, The Vagabond, reveals his breadth as who The New York Times calls “a composer worth watching.” Across nine original tracks and works by Philip Glass and Sergei Prokofiev, Aaron leans into imagination and exploration. His forthcoming solo record, poised for release in spring 2021, promises an expansion of that search in a setting at once unbound and intimate.

Dominick Farinacci: Trumpeter Dominick Farinacci was named the very first Global Ambassador to Jazz at Lincoln Center by Wynton Marsalis, working to further integrate music into communities around the world in culturally collaborative ways. He graduated from The Juilliard School in 2005 launching his career in Japan with a prolific run of eight albums, later releasing four more globally. He has performed in more than 120 cities in 14 countries around the world, was a featured guest on ABC’s Good Morning America, and is a TED Speaker. Music icon Quincy Jones says of Dominick’s accomplishments in performance, recording, education & advocacy, “This kid is 360 degrees!”