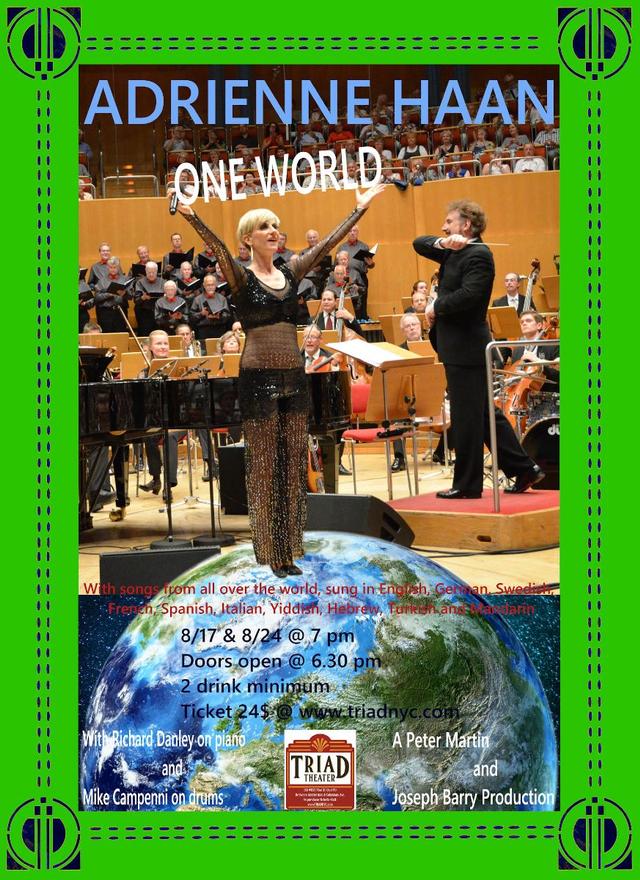 "Haan is the first lady of cabaret!" (Wolf Entertainment Guide)

"Haan is a star on the rise and an entertainer of the highest caliber." (The Huffington Post)

"A must-see! There is no other show out there quite like it. Haan truly is a bridge- builder and funny as hell!" (Cabaret Scenes)

International Chanteuse Adrienne Haan is happy to present her ONE WORLD show for the first time in NYC. The whole world has suffered in the past year and this pandemic has shown that we are all in this together. Hence we are celebrating life around the world in 11 languages. This show is based on her ONE WORLD project that she founded with her musical partner Walter Florin with whom she premiered at Carnegie Hall in 2015. They have created virtual performances for comfort in several languages during the pandemic that can be found on YouTube.

Haan has recently performed in the USA, Europe, Israel, Turkey, China, Australia, South America and South Africa and a lot of languages and world music have influenced her career. She continues to thrill audiences world-wide as well as in NY and is happy to share her multilingual feast of international music with New Yorkers at her home base, the Triad Theater. This show includes songs in English, German, Swedish, French, Spanish, Italian, Hebrew, Yiddish, Turkish and Mandarin!

With Richard Danley (MD) on piano and Mike Campenni on drums.