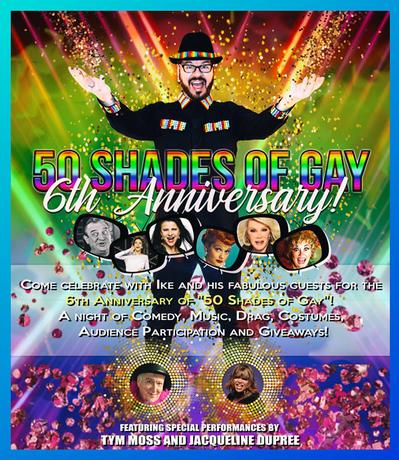 “A fun night of stories, videos, songs, comedy, and a lipsynching contest. By time it was over, I felt even gayer—and I didn’t think that was possible” – Michael Musto

Join Ike Avelli and his fabulous guests as they celebrate the 6th Anniversary of 50 Shades of Gay with a night of comedy, music, drag, video sketches, audience participation and giveaways. Starring Tym Moss and Jacqueline Dupree!

Back in 2015, Ike Avelli decided to create an Adult Variety Show for Gay Pride in NYC, and 50 Shades of Gay was born. The day before the show, Friday, June 26, the Supreme Court Ruled; Same Sex Marriage A Right Nationwide! On the night of the show, Saturday June 27, the theater in NYC was sold out and everyone was ready to celebrate. Since its debut, Ike has been selling out venues all over the U.S. and continues to do so five years later. Critics and audience members alike have been raving and Avelli continues to provide the best in comedy, music, drag, and most important, audience participation with lots of giveaways!