The Sixties Rock & Roll Revue with The John McDermott Band 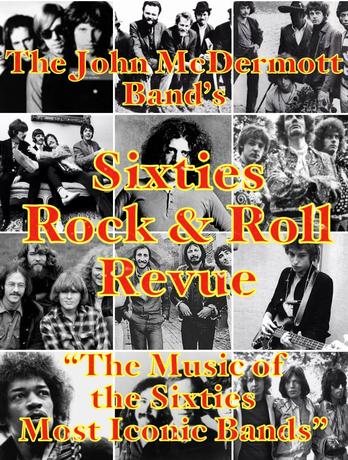 “The Sixties Rock & Roll Revue with The John McDermott Band” recreates and performs the music of the most iconic Rock & Roll bands of the 1960's. Providing an exciting live concert experience, the band takes you on a trip back to one of the most influential musical periods of our time. The concert performances include hits from some of the greatest artists in rock & roll history, tribute sets and notable "B" side tunes.

The band led by John McDermott, is comprised of a group of talented musicians who have performed and toured throughout the world entertaining live audiences. The band performs a vast array of popular artists from this period, delivers exciting and varied musical set lists and can perform tribute sets with notable guest musicians based on the audience's interest.

A list of a few of the artists that the John McDermott Band covers: The Band, The Beatles, The Birds, Bob Dylan, Eric Clapton, Joe Cocker, Cream, Creedence Clearwater, CSN, The Doors, The Grateful Dead, The Hollies, Jimi Hendrix, The Lovin' Spoonful, Van Morrison, The Rolling Stones, Santana, The Who, The Zombies and many others.