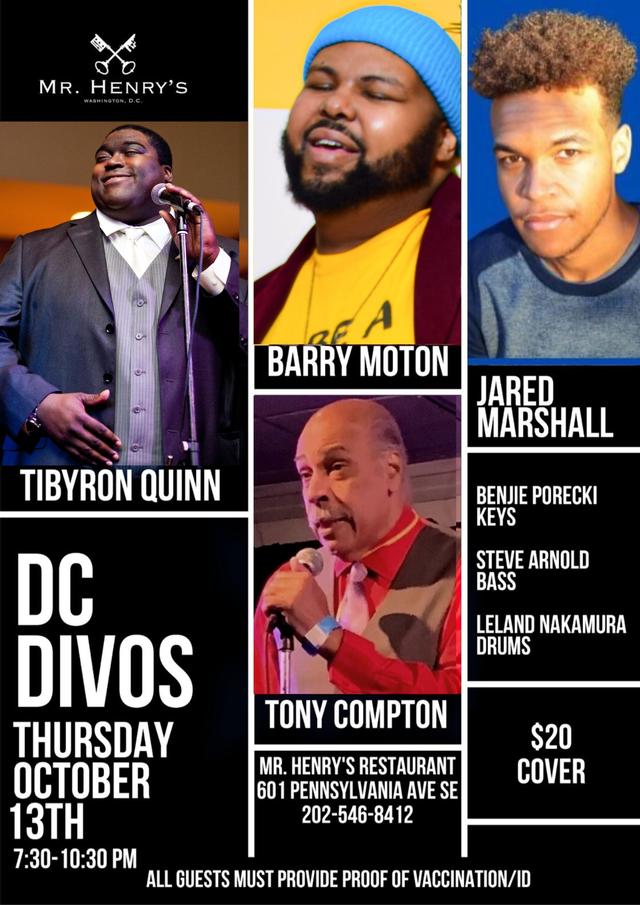 DC DIVOS
DC Divos is a showcase of blossoming DC talent with an eye toward headlining at Mr. Henry’s
or other clubs here in the DC jazz arena. We hope you will enjoy these great men we have brought together on the same stage.

Tibyron Quinn
Born in Delray Beach, FL, Tibyron Quinn gift for music was recognized at a young age. Tibyron garnered his first experiences with singing and performance with his church choir at the age of six. It wasn’t until his family relocated to western NY for high school that he took his first voice lessons. As a lead soloist in various theater and chorale productions Tibyron was continually exposed to music of varying styles. While attending Ithaca College, pursuing a degree in Biochemistry and playing football, Tibyron sang co-lead and helped form the 8 piece soul-funk powerhouse Nozmo King. It was not until after college and a move to Boston that he committed himself to the pursuit of music.

Barry Moton
Barry Moton is a jazz vocalist and educator hailing from Peoria, Illinois earning his BM in Vocal Jazz Performance from Southern Illinois University at Edwardsville. He then furthered his education by earning his Master’s Degree in Vocal Jazz Performance from Howard University. He has performed with wonderful artists like Vanessa Rubin and Roy Hargrove. He teaches high school music at Anacostia High School, and is a new Jazz Voice Professor at GeorgeWashington University.  Barry is so grateful and thankful to be a part of this wonderful event

Jared Marshall
A native of PG County, MD, Jared Marshall realized a new perspective of jazz voice after being introduced to the DC jazz scene in the fall of 2018. Originally a classically trained vocalist — a countertenor — his falsetto range intends to outcast the voice as a binary instrument. He is a recent graduate of George Mason University where he received his Bachelor’s in Vocal Music Education in the fall of 2021, and he now resides in New York to study voice at Manhattan School of Music. Jared is humbled and honored to return back to DC to have an official debut at Mr. Henry’s for this event.

Tony Compton
Native Washingtonian Anthony Compton's introduction to music was by the soft alto voice of his mother, Connie singing the gospel spiritual “In the Garden” during his childhood. As member of the Elliston Music Studio Gospel Choir, he has performed at the East Coast Jazz Festival. Recently, Anthony performed at the 2022 Midatlantic Jazz Festival. All these opportunities encompass the different disciplines and seasoned artists that have placed Anthony Compton on his musical journey. Anthony Compton demonstrates a devotion to perform with pure intent and delivery which cultivates his unique style and calling as a “balladeer extraordinaire”.