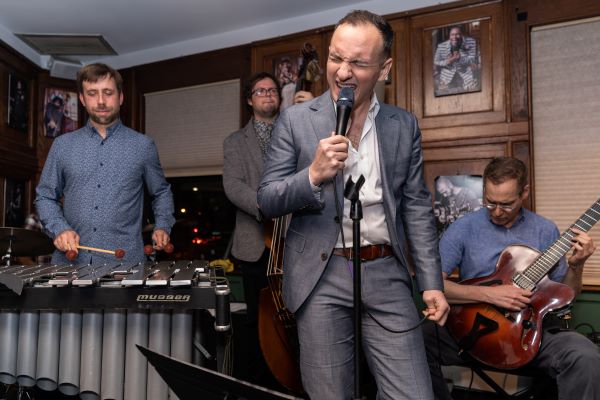 Landon Paddock is a stylish and charming vocalist with a smooth but powerful voice reminiscent of the American Songbook’s great crooners, from Frank Sinatra and Johnny Hartman to Michael Buble and Harry Connick Jr. Landon has performed regularly at DC’s top jazz clubs including a weekly residency at Columbia Station and frequent appearances at hot spots old and new like Jojo, Sotto, Penny Whiskey, and Fig & Olive. Whether performing in a stripped-down piano and voice setting or with a full six-piece band, Landon is passionate about cultivating an intimate and engaging atmosphere. As a bandleader collaborating with some of the DC Metro area’s finest musicians, Landon draws from jazz standards, bluesy stomps, and pop classics to make listeners feel as if they’re truly a part of something special. Born and raised just outside DC in Prince George’s County, Maryland, Landon absorbed the rich jazz history of the city he now calls home, as well as a childhood steeped in the artform’s greats like Ella Fitzgerald and John Coltrane. He considers it an enormous honor to perform in the DC jazz clubs he frequented before he’d even reached the legal drinking age.

Doors open at 6pm show begins at 8pm.. PROOF OF COVID VACCINATION IS REQUIRED. For our live music on Saturday nights we do have a food & beverage minimum of $15 in addition to the ticket price. Ticketholders are seated on as they arrive per the floorplan determined by management ahead of time. Walk-in patrons may be seated as soon as possible if space permits. Performance area is on our second floor, accessible only by a steep set of stairs.