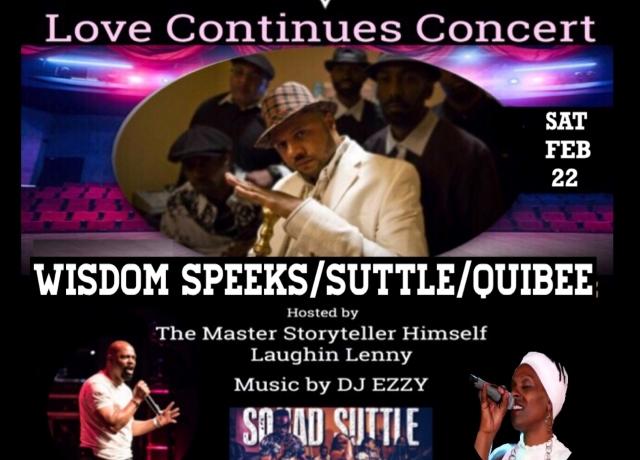 Wisdom Speeks Band & Show has been illuminating audiences with a unique style of music affectionately called "Global Soul" under the leadership of Wisdom Speeks aka Whop Craig who formed the band in 2009. The band's distinctive rhythm and musical storytelling communicates their message to live, love and laugh with a positive heart and the occasional spoken words of wisdom that only Whop can deliver. As a multi-talented  music professional, Whop has produced for various national artists including Snoop Dogg and Bone Thugs-N-Harmony, as well as producing an original soundtrack for the movie “Guilty by Association” starring Morgan Freeman while also managing seven network television shows during his time with BET. He has assembled this band featuring multi-talented musicians who have become the new standard for live bands in the DC area and recognized worldwide for their excellence. All in all, Wisdom Speeks Band & Show are here to stay...and they're here to inspire the world!

Suttle Thoughts was formed in 1994 and then became Suttle in 2016. Their individual talent and background brings a unique and versatile sound with the ability to play a variety of musical genres from Go-Go, R&B, Jazz and Soft Rock. They have often opened for national artists including The Isley Brothers, Anthony David, J. Holiday and many more. They have always performed regularly in the DC area at popular local venues and festivals as well as performing outside the area including Texas, Florida, Puerto Rico and Cancun. They are best known for their lively performances that always get the party started and keep it going!

Also featured are opening act Quibee & her Co Conspirator, music by DJ EZZY and hosted by The Master Storyteller Himself Laughin Lenny!