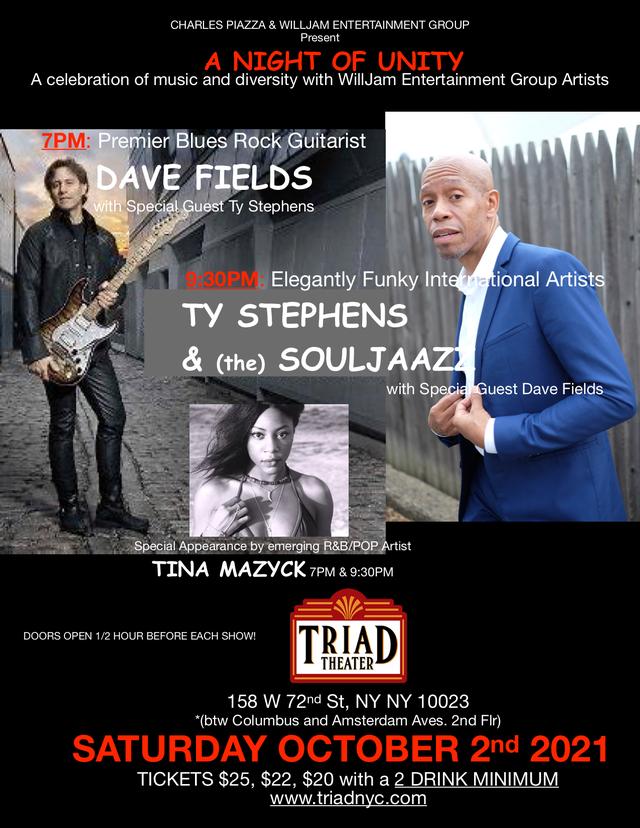 "Stephens' voice is like honey... pure and sweet..."
- The Philadelphia Tribune

"...a must-see band to be experienced live...!"
- The New York Amsterdam News

World entertainers, Ty Stephens & (the) SoulJaazz, have been packing in audiences globally for many years. Catching them at the world famous Blue Note in NYC; witnessing repeated standing ovations from the international crowd, brought Buzz Willis out of semi-retirement, and caused Robert “Kool” Bell to put his name behind these original, versatile, “elegantly funky” R&B/Jazz musicians.

With an extensive career in theatre, dance, TV and Radio commercials, Ty Stephens has performed with Japanese superstar Toshi Kubota for 8 tours and, appeared on Broadway in the original companies of “Sophisticated Ladies” and “Marilyn, An American Fable”, and, in 2018, was given the Audelco Award for “Best Actor In A Musical” for “On Kentucky Avenue” He has recorded with Harry Belafonte, Peggi Lee, Houston Person, Alyson Williams, Baba Olatunji, Chuck Mangione, Gwen McCrae, and many more. He is a songwriter, vocal arranger, producer, actor, dancer, choreographer, director and more! A master showman.