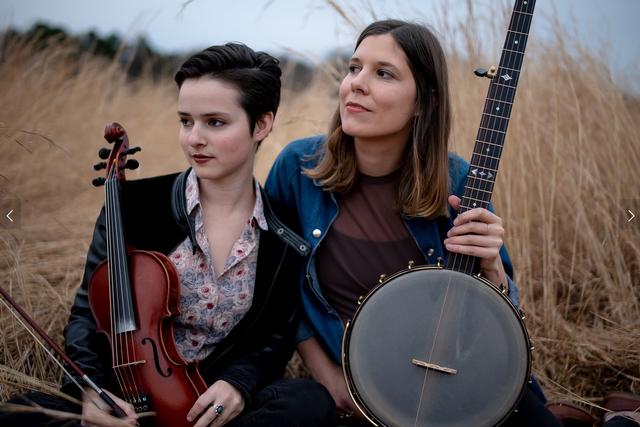 Allison Degroot and Tatiana Hargreaves’s self-titled debut album is a powerful opening statement. The record not only showcases the duo’s impressive musicianship, but is a reflection on which voices we seek to hear as we explore the expansive, diverse canon of American roots music. The album’s 13 tracks feature lesser-known American fiddle and banjo songs from African American duo Nathan Frazier & Frank Patterson, centenarian Arkansas fiddler Violet Hensley, bluegrass pioneer Alice Gerrard, contemporary master tunesmith Judy Hyman (The Horse Flies), and more. Already leaders in the young generation of roots musicians, de Groot has become known for her intricate clawhammer banjo work with Molsky’s Mountain Drifters, while Hargreaves has brought her powerhouse fiddling to the stage with Gillian Welch and Laurie Lewis. Together they create a sound that is adventurous, masterful, and original, as they expand on the eccentricities of these old songs, while never losing sight of what makes them endure.

Allison de Groot combines love for old-time music, technical skill and a creative approach to the banjo forming her own sound – unique and full of personality.  Her collaborations with Allison de Groot & Tatiana Hargreaves, Bruce Molsky’s trio Molsky's Mountain Drifters, The Goodbye Girls and Nic Gariess provide spaces to explore the role and depth of clawhammer banjo. Allison has toured all over the world with various groups, performing at events such as Newport Folk Festival, Celtic Connections, Rockygrass, Hardly Strictly, Winnipeg Folk Festival & Tønder Festival.  The music scene in her hometown of Winnipeg, Canada, immersion in Appalachian old-time communities, a performance degree at Berklee College of Music in Boston, and touring extensively throughout North America and Europe have all shaped her playing.

Over the past eight years, Tatiana Hargreaves has been on the forefront of an up and coming generation of old time, bluegrass and new acoustic musicians. Since releasing her first solo album “Started Out To Ramble” in 2009, Tatiana has toured with musicians such as Dave Rawlings, Gillian Welch, Laurie Lewis, Darol Anger, and Bruce Molsky. From placing first at the Clifftop Appalachian Fiddle Contest, to her bluegrass fiddling on Laurie Lewis’ GRAMMY-nominated album The Hazel And Alice Sessions, Hargreaves shows a musical fluency that flows between old time and bluegrass worlds with ease. She currently tours with banjo extraordinaire Allison de Groot and teaches bluegrass fiddle at the University of North Carolina in Chapel Hill.