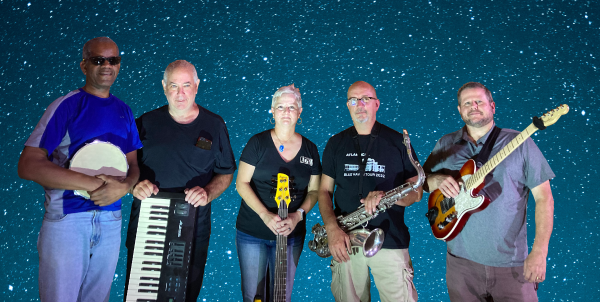 Stickman boasts an impressive repertoire of engaging original compositions, topped off with
arrangements of modern jazz and fusion classics. All of the group’s members are contributing
composers and arrangers and, stylistically, their sound is a musical melting pot. Straight ahead,
modern funk, and world beat rhythms, combined with an adventurous compositional style, are
fused into a tight ensemble sound with a creative jazz spirit at its heart. In the 90’s, Stickman
opened for David Sanborn at the Mellon Jazz Festival in Pittsburg, PA, and comedian Jamie
Foxx. They have performed at such prestigious venues as the Kennedy Center, DC’s legendary
Blues Alley jazz club, and at the Rosslyn, VA jazz festival.
Stickman’s quintet line-up contains Peter Fraize on tenor and soprano saxophones, Jim Levy on
keyboards, Matt Rinker on guitar, Liza Albright on bass, and Francis Thompson on drums. All
five are accomplished performers in their own right and have pooled their individual talents to
give the group its distinctive, modern sound.

Doors open at 6pm show begins at 8pm. For our live music on Saturday nights we do have a food & beverage Minimum of $15 in addition to the ticket price. Seating Policy: Ticketholders are seated on as they arrive per the floorplan determined by management ahead of time. Performance area is on our second floor, accessible only by a steep set of stairs.