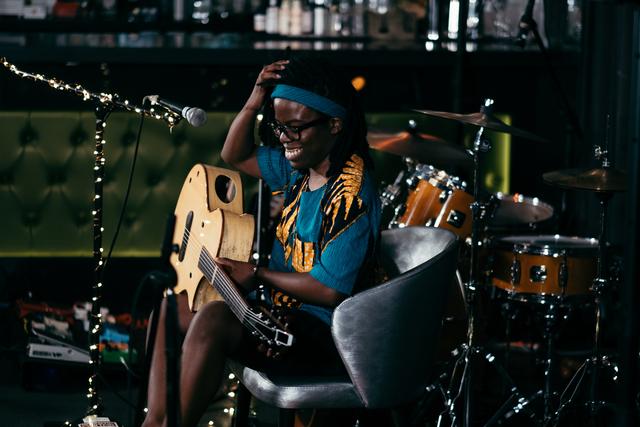 Perhaps not since the arrival of Michael Hedges has there been such a bold acoustic innovator, Remember her name: Yasmin Williams has arrived. - Peter Brown, Vintage Guitar Magazine

Yasmin Williams only started playing the guitar after beating all the songs on expert-level on Guitar Hero II. "I figured, well, I beat that game, I can probably play a real guitar now," she says.

Nine years later, Williams is one of the stand-out entrants of this year's Tiny Desk Contest. Williams bills herself as an acoustic finger-style guitarist with the cheeky tagline "Music at your fingertips." Williams's music transcends the standard idea of what a guitarist should do. She uses a cello bow to make low droning sounds, an idea she got from the band Sigur Rós. At the same time, she finger picks melodies with the guitar on her lap and adds a beat with tap shoes.

"A lot of the stuff on the radio right now is very aggressive and kind of sounds the same and kind of in your face," she says. "I like my music to be more melodic, more calming. Just something easy to listen to but has substance." Her debut album is appropriately named Unwind.