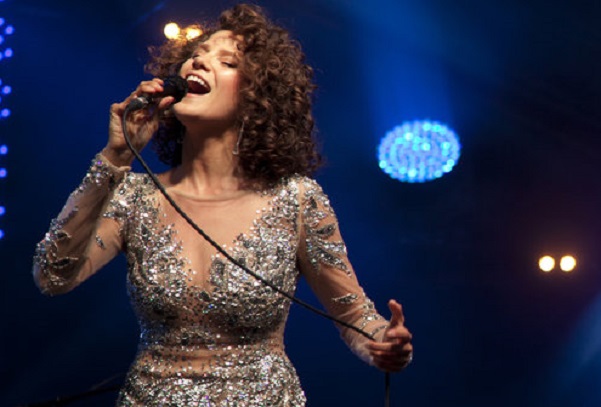 Grammy Nominated Vocalist from France and her Group back at Nighttown for 2 Big Shows!

Improvisation is not just a technique for Grammy Nominated artist Cyrille Aimée, it’s a way of life, one that has not only allowed her to share her engaging voice and sparkling creativity with the world, but has led her on an unexpected journey.

By opening herself to the whim of the moment, Aimée has ventured from singing on street corners in Europe to dazzling audiences at some of the world’s most prestigious jazz festivals.

That adventure began in the small town of Samois-sur-Seine in France, where the young Cyrille Aimée (Sur-real M-A) was introduced to a wealth of diverse music by her French father and Dominican mother.

As the site of the annual Django Reinhardt Festival, Samois played host to an annual gathering of gypsies, and their fireside sing-alongs would lure the precocious Cyrille out of her bedroom window after her parents had gone to sleep. Those experiences exposed Aimée not just to the joys of gypsy jazz, which would go on to be an important color in her rich palette of influences, but more importantly to the gypsies’ spontaneous, nomadic and music-filled way of life.

It was the idea and unlimited potential of improvisation that set Aimée on her course, and the desire to pursue that in-the-moment creation inevitably led her to jazz. She spent her teen years performing in the cafés and clubs of Paris, then attended the American School of Modern Music there.

Aimée was soon drawn to the U.S., where she attended SUNY Purchase – in large part due to its proximity to the jazz hub of Manhattan. She honed her skills through weekly gigs at a Soho restaurant and at Birdland Jazz Club.

At the famed Montreux Jazz Festival in 2007, Aimée won the vocal competition, recording her debut album with the prize money. It was the first of many such accolades to come, including winning the Sarah Vaughan International Jazz Vocal Competition and becoming a finalist in the Thelonious Monk Jazz Vocal Competition.

At the same time, no less an authority than Stephen Sondheim recognized that Aimée’s captivating gift for storytelling through song would translate to the theatrical stage. The musical theater icon hand-picking her to star alongside the legendary Bernadette Peters in an Encores Special Presentation tribute to Sondheim at New York’s City Center in November 2013, backed by Wynton Marsalis and the Jazz at Lincoln Center Orchestra.

For Aimée herself, the future holds the promise of many more surprises ahead. After more than a decade in New York City she’s embarked on a new chapter in New Orleans. She’s also focusing more intently than ever before on her own songwriting, taking her music in fresh new directions. As always for Cyrille Aimée, the only thing that’s certain is that she’ll find a creative spark and a new pathway from whatever happens next.