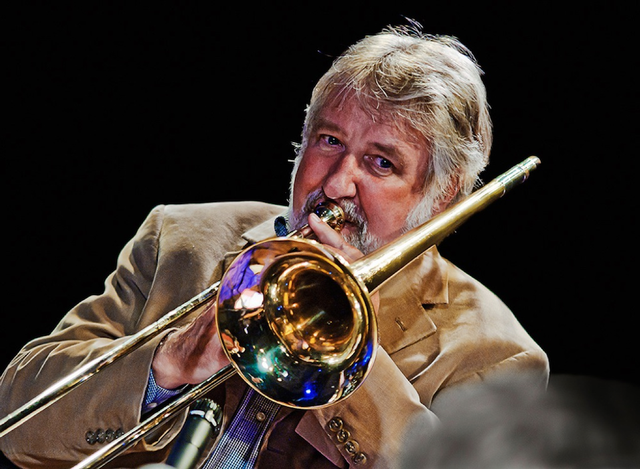 Trombone Master and Native of Cleveland back home from Germany for Special Evening!

Jiggs Whigham is an internationally acclaimed trombonist, band leader  and educator. Born in Cleveland Ohio in 1943, Jiggs first came to the attention of critics and fans at 17, as featured soloist with the Glenn Miller Orchestra, directed by Ray McKinley. Two years later, he was first trombonist with Stan Kenton. Following a year of studio and Broadway Musical engagements in New York, he became featured soloist with the Kurt Edelhagen Jazz Orchestra at the West German Broadcasting Company in Cologne, Germany in 1965. In 1966 Jiggs was awarded 1st Prize at the first competition for Modern Jazz in Vienna.

He uses Bonn, London and Cape Cod as home bases, In 1979 he was named Professor and Head of the Jazz Department at Cologne University College of Music. In 1995 he was named "Professor for Life" and head of the Jazz-Popular Music Department at the "Hanns Eisler" College of Music in Berlin. From 2000-2001 he was visiting professor at Indiana University. He was bandleader of the Swiss Radio Band (Radio DRS) from 1984-1986. From 1995-2000 he was chief conductor and artistic director  of the Berlin Radio Orchestra (RIAS Big Band Berlin).

He is currently soloist and conductor of the BBC Big Band in Great Britain, artistic director of the Berlin Jazz Orchestra and visiting Professor at the Guildhall School Of Music And Drama in London and visiting tutor at the Royal Northern College of Music in Manchester, England.