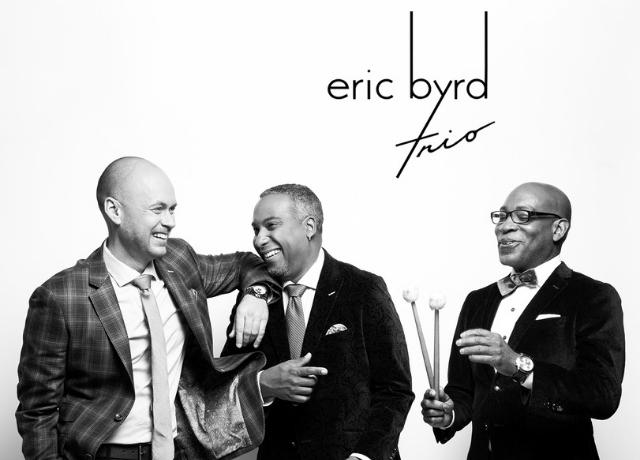 The Eric Byrd Trio celebrates its 20th anniversary with its new release “Twenty”.  This recording of original compositions and arrangements continue to cement their status as a formidable jazz piano vocal group.

For almost two decades, The Eric Byrd Trio (EBT), pianist/vocalist Eric Byrd, bassist Bhagwan Khalsa, and drummer Alphonso Young, Jr., have traveled the world as enthusiastic ambassadors of jazz. Rooted in swing and be-bop, The Trio also embraces gospel and the blues as core elements of their expansive performance style. Their body of work spans seven unique studio and live recordings on which they shine as a Trio and as collaborators with an expanded 8-piece ensemble they call The Eric Byrd Trio: Brother Ray Band, in tribute to The Genius of Soul icon Ray Charles. On each recording, they take a rigorous, modern approach to standards as well as original compositions, playing with great acuity within the broad and rich jazz tradition.

Eric, Bhagwan, and Alphonso are educators with advanced degrees in Music History, African American Music, and Jazz Performance. They frequently give clinics on music history, jazz, and the relationship between the spirituals/gospel, blues, and jazz. Because of their immense knowledge of music, commitment to music education, and ability to teach diverse and international audiences, they have been sponsored by the Untied States Embassy as Kennedy Center/U.S. State Department Jazz Ambassadors touring South America, Central America, the Caribbean, Eastern & Western Europe, and the Middle East. The Trio has also delighted audiences across the globe at the historic Montreux Jazz Festival and in Bolivia, Chile, Colombia, Dubai, Estonia, Honduras, Italy, Peru, Scotland, and Trinidad and Tobago.