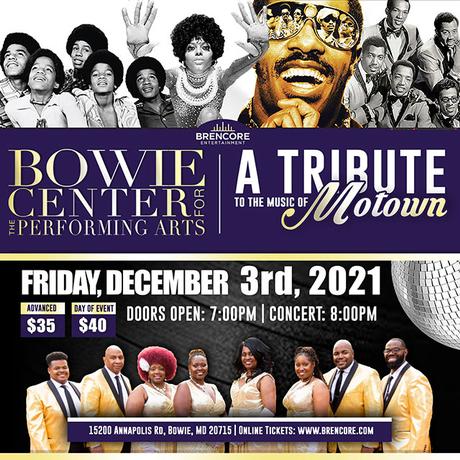 A Tribute to the Music of MOTOWN

The BRENCORE ALLSTARS BAND is a tremendously talented 14 - piece musical anomaly from Washington, DC comprised of music dynamo’s that bring a depth, richness and appreciation to some of Motown’s greatest hits. Performers have a deep seeded musical connection and sweat in honor of some of Motown’s Greatest Greats!

The variety and range of songs performed in a series of medleys and powerhouse songs will have you singing and dancing to your favorite MOTOWN songs all night long. This MOTOWN Tribute has sold out many venues such as The Historic Howard Theatre, The Carlyle Club, The Roanoke Rapids Theatre, The Bethesda Blues and Jazz Supper Club with plans to showcase the musical genius of the BRENCORE ALLSTARS in many more locales

The delivery, the energy and the powerful voices of the The BRENCORE ALLSTARS Band never disappoints. Diverse audiences from 300 miles in any direction around and near Washington, DC area have snapped their fingers, tapped their toes and been musically transported to a time when the music of the Temptations, The Four Tops, Diana Ross & The Supremes, Marvin Gaye & Tammi Terrell, Smokey Robinson, Jr. Walker and The All-Stars, Stevie Wonder, Michael Jackson, Aretha Franklin, Gladys Knight and The Pips graced the stage and wooed audiences across the globe!
Because we are in the holiday season we will also be performing some of MOTOWN Greatest Christmas songs as well.  Bring the whole family out to have a great time.