The Ebonys, Peaches & Herb and The Casuals 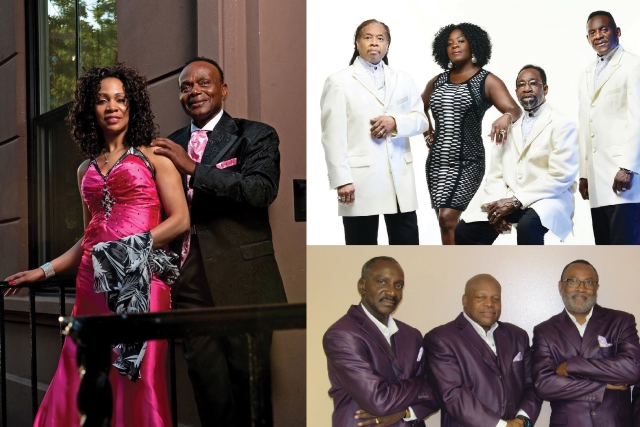 The Ebonys, Peaches & Herb and The Casuals

The Ebonys represent the soulful sound of Philadelphia with their classic love songs from the 1970s that bring back fond memories. Signed to the legendary Philadelphia International Records under Gamble and Huff, The Ebonys' first song "You're The Reason Why" was Top 10 R&B hit and immediately established the group's identity with sensational lead singing and strong harmonies. The Ebonys' signature song "It's Forever" cemented the group's legacy with its beautiful melody featuring soaring high tenor and pleading baritone sharing lead vocals backed by impeccable harmonies. The current lineup is William “Smoke” Howard, Ken Chaney, Neva Wilks and Ray Keniebrew, each with their own distinctive style that brings new life to the sound of The Ebonys.

Peaches & Herb are local legends from Washington, DC who became one of the most successful singing duos in R&B music. Herb Fame has remained a constant as "Herb" since the duo was created in 1966 while two different women have filled the role of "Peaches" on their classic hit songs. The original "Peaches" was Francine Barker who lent her nickname to the duo, and they had a string of hit singles in the late 1960s including "Close Your Eyes", "For Your Love" and "United." A decade later in the late 1970s, Herb reemerged with new "Peaches" Linda Greene on the duo's biggest hits "Shake Your Groove Thing" which was Top 5 R&B and Pop followed by the smash hit "Reunited" which was #1 R&B and Pop as well as nominated for Grammy Song of the Year.

The Casuals are another favorite local group from Washington DC still performing today with original members Roger Chapman and George Norris as well as newest member Morris “Spunky” Cobb. The Casuals had success in the 1970s with original lead singer Skip Mahoney on their first R&B chart single “Your Funny Moods” and later Top 40 R&B hit “Bless My Soul.” But any concert by The Casuals would not be complete without the audience singing along to their classic song “Wherever You Go.” After more than 40 years in the music business, Skip Mahoney & The Casuals were inducted into the Rhythm & Blues Hall of Fame.