Here Comes the Sun: Singing the Shadows Away 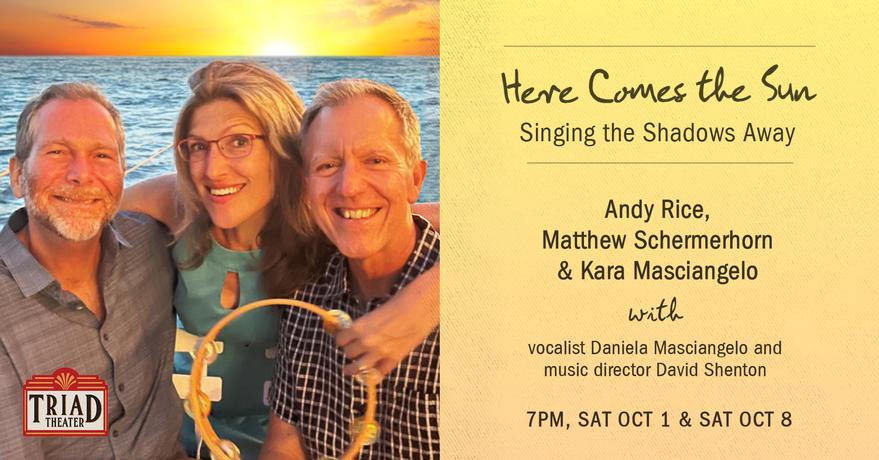 Matthew Schermerhorn, Andy Rice, and Kara Masciangelo will headline Here Comes the Sun: Singing the Shadows Away on October 1st  & 8th, 2022, at 7:00pm. Back for their fourth year at The Triad, Schermerhorn, Rice, and Masciangelo present a harmonious evening of optimistic music and hopeful messages as they sing the shadows away through a variety of genres, including the works of The Beatles, Elton John, Tina Turner, Fleetwood Mac, Simon & Garfunkel, Peter, Paul & Mary, Kander & Ebb, David Yazbek, Pink Martini, and more.  Joining the show are guest vocalist Daniela Masciangelo, and music director David Shenton and his cabaret band – including Jerry DeVore on bass, Peter Sachon on cello, Micah Burgess on guitar, Eric Halvorson (10/1) and Ben Saporito (10/8) on drums, and David Shenton doubling piano and violin.

Matthew Schermerhorn and Andy Rice have been singing together since the day they met in the Lesbian/Gay Chorus in San Francisco in 1995.  They founded Musaic, a San Francisco mens a cappella vocal ensemble that performed over 200 concerts in the Bay Area in its 20-year tenure.

Kara Masciangelo and Daniela Masciangelo have been collaborating vocally since emerging from the womb 48 years ago in New York City. As identical twins, they spent innumerable hours and years in the service of entertaining each other, singing along to whatever was playing on the record player or the oldies station, honing their harmonies.