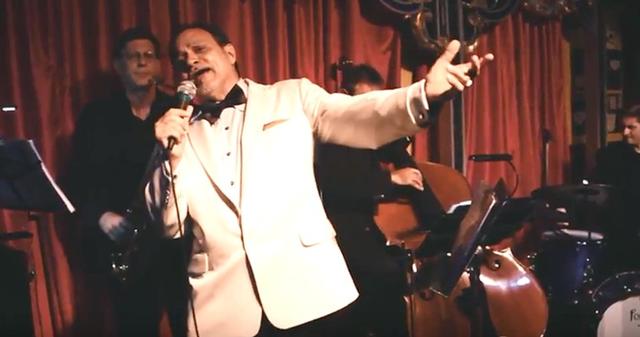 Lou Armagno  Lou was performing in Honolulu Hawaii before moving back home to Cleveland in 2013.  He deputed his first CD, “FLYIN’ HIGH” right here on our Nighttown stage May 2014.  And their Sinatra Selects CD, “NEVER BEFORE”  won a 2016 Hawaii, Na Hoku Hanohano award.  What sets Lou apart from other Rat Packer’s is his remarkable similarity in sound and delivery to “The Man” himself.  You won’t believe your ears!”

Marc Paige   Marc has been playing clarinet and saxophone for over 55 years. He has performed with many rock, blues and jazz groups, along with most of Cleveland's big bands.  Additionally, he is a member of the Solon Philharmonic Orchestra, and a board member with Cleveland Jazz Orchestra.

Mike Elkins  Mike Elkins is a pianist, music director, and arranger.  He is a veteran of several area big bands and currently the pianist for the Dan Zola Orchestra.  He has worked in regional musical theater productions as a pit orchestra member and music director at Beck Center, Huntington Playhouse, Clague Playhouse and the former Berea Summer Theater at Baldwin Wallace University.  Mike is one half of the singing duo, Mike and Mary, in which he plays keyboards, sings, and arranges.  Mike is employed as a software engineer and lives in Berea with his wife, Linda.

Jim Mass  Jim is a Cleveland native with a diverse musical background spanning more than 40 years. Being equally comfortable on both Acoustic and Electric bass, he has played in most every musical genre, including Jazz, Pop, Rock, Big Band, Classical, Country, Bluegrass, Shows and Plays, Christian and Ethnic. His musical foundation makes him a quick study, and a first call on many sub lists in the area. Groups (to name a few) he has played with include the NEO Jazz Orchestra, Skyline, Swing City Big Band, The Juice Band, Jazz Connection, Johnny Baron Quintet, the Tom Fries Orchestra, Summit Jazz, Cleveland Philharmonic, Hermit Club and Chagrin Studio Orchestras, Rob Michaels, and Josephine Venuti.

Ricky Exton  Drummer, recording artist, composer, arranger, and producer, Ricky has been active in the music community for over 2 decades. At an early age, Ricky's talents emerged as one of the Cleveland Tri C All Stars. He continued his career in music at the Berklee College of Music in Boston, Mass., where he earned a Baccalaureate in Professional Music. His performance venues include jazz festivals, concerts, television appearances, and private and corporate events. He has performed with Lou Rawls, Wynton Marsalis, Rufus Reid, Cyrus Chestnut, Joanne Brackeen, Kim Nazarian, Linda Presgrave, and international guitar virtuoso Neil Zaza. In addition, Ricky is an active session musician recording in studios from the east coast to the west coast.