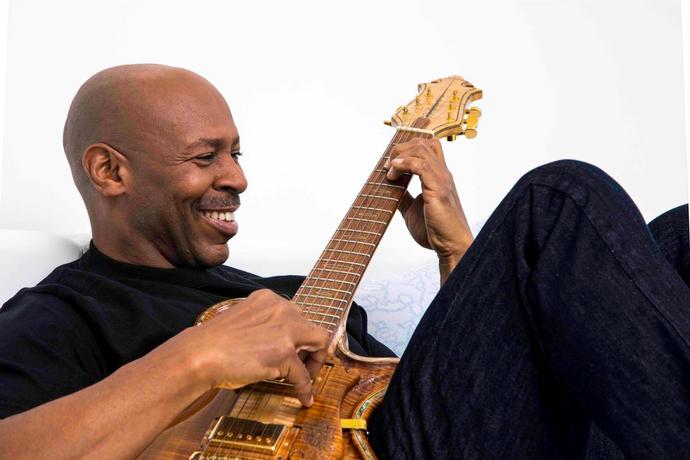 Since his 18-year tenure as guitarist and music director of TV’s The Tonight Show Band ended in 2010, Philadelphia-born guitarist, composer Kevin Eubanks has been on a creative roll. On East West Time Line, Eubanks explores the chemistry he maintains with musicians on both coasts. And once again, his distinctive fingerstyle approach to the instrument is in the service of tunes that run the stylist gamut from urgent swingers to introspective ballads to Latin-tinged numbers and some get-down Philly funk.

Kevin was first drawn into music listening to the energetic sounds of fusion and progressive rock, then went on to study at Berklee. He has played with icons including McCoy Tyner, Art Blakey, Roy Haynes, Dave Holland and Ron Carter. In his own distinctive early career, Eubanks released many recordings for Elektra, GRP and Blue Note before his current signing with Mack Avenue in 2010.  With his second Mack Avenue Records release, The Messenger, acclaimed guitarist Kevin Eubanks continues to explore his own unique musical vision. This vision offers the listener an opportunity to share a musical journey that truly exemplifies where Eubanks is at this stage of his illustrious career; one that, for over three decades, has seen him incorporate into his creative process a willingness to embrace the broad spectrum of his musical experience, while continuing to seek out new vistas.

10PM / $45 Get Tickets
*Please note:
1. Final sale, no refunds, not transferable.
2. $12 food/beverage minimum per person not included in ticket price.
3. Seating first come at the door. Doors open at the earliest of 6 PM & 9:45 PM respectively.
4. Photography or Recording of any kind is prohibited during the performance.
5. Keep conversation to a minimum during the performance.