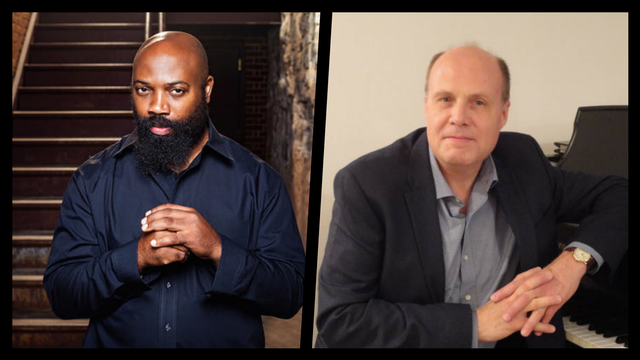 Dont miss this amazing two piano performance- a meeting of two of the finest pianists anywhere, live on The Mainstay Stage!

Allyn Johnson is a pianist, composer, and arranger whose trademark sound gives brilliance and fortitude to the art of jazz improvisation. Allyn began playing piano at the age of five, got his start playing piano for the youth choir in his uncle's church. There he honed his inner musical gift. While a student at the University of the District of Columbia, Allyn was mentored by the late great jazz legend Calvin Jones, a venerable figure in the international jazz community. Now Allyn has succeeded Jones as the director in 2005. Johnson has the reputation of being one of the most versatile pianists in the D.C. region, and has leant his talent to stalwarts such as Hamiett Blueitt, Warren Wolf and Paul Carr. Johnson has the ability to instantaneously adapt and respond to musical cues, even as he possesses the technical facility to elevate the sonic conversation.

Robert Redd is a current member with The Duke Ellington Orchestra, performing throughout the U.S. and abroad. Most recent tours with the orchestra have included Japan, Singapore, Korea, Israel and London. He was a member of the late Keter Betts trio for 13 years and continues to be pianist and leader for the Wolf Trap Jazz Trio which was started by Betts’. From 1995-1998, Robert was pianist and musical director for singer/songwriter Kenny Rankin. He performs often with the Smithsonian Jazz Masterworks Orchestra and worked frequently as a member of the Charlie Byrd Trio, and appears on Charlie’s last recording, “For Louis”. Robert can be heard on numerous recordings and is also a QRS recording artist, having recorded two piano rolls for the New York-based company.