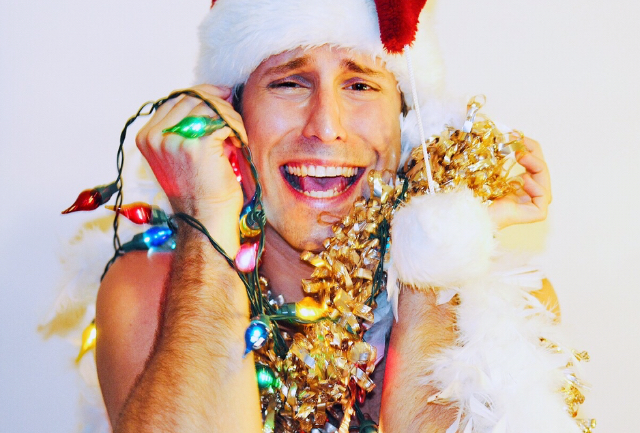 Make the Yuletide GAYER THAN CHRISTMAS!

Star of the cabaret stage, ANTHONY FETT is back performing his sell-out holiday show LIVE at THE TRIAD THEATER in New York City!

A merry musical celebration full of unfettered energy and exuberance, “GAYER THAN CHRISTMAS” takes the audience on a sleigh-ride from silly to sentimental.  Featuring hilarious holiday hijinks, dazzling costumes, jingle bells, and special guests, including a sexy visit from Santa!

* GAYER THAN… THE CLASSICS

Holiday hits and nostalgia with the musical stylings of Bing, Bublé and Barbra.

Caroling comes to you!  Audiences “join the chorus” for their favorite festive tunes!

A one-of-a-kind celebration that will leave you with magical musical memories to last throughout the year!

“An engaging performer with a formidable set of pipes”
-TimeOut Chicago

"Imagine a musical remake of Saturday Night Fever set in 1970's Fire Island, and you'll get a sense of Anthony Fett's general vibe. A familiar figure in the West Village piano bar scene, this indefatigable showman works like a champ, loading every number with pedal-to-metal pizzazz."
-TimeOut NY

ANTHONY FETT is a singer, actor, entertainer, and award-winning emcee. He began his singing career as a member of the world-renowned Chicago Children’s Choir, The Lyric Opera of Chicago and The Chicago Symphony Orchestra.  He has performed and recorded with numerous artists including David Foster, Dennis DeYoung (Styx), and Celine Dion. Anthony is featured as the singing voice of Freddy in the animated feature "Barbie in A Christmas Carol". Theater credits include the iconic Off-Broadway comedy "Tony n' Tina's Wedding" (25th Anniversary Times Square production) and the national tours of “Bye Bye Birdie” and Disney’s "Beauty and the Beast”.  Anthony served as the leading emcee of EnerGy National Dance Competition, and was named "Emcee of the Year" by The Association of Dance Conventions and Competitions.  He was featured on several episodes of the Lifetime TV series "Dance Moms". His shows have delighted audiences around the world.  “GAYER THAN CHRISTMAS” has been lauded as a ‘must-see’ event of the holiday season.