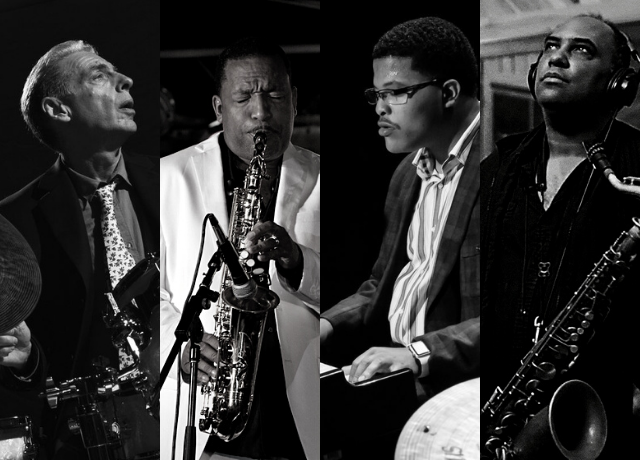 While often referred to as the “Tony Williams of funk,” Mike Clark is considered one of the foremost jazz drummers of the genre. He gained worldwide recognition as one of the instrument's important innovators while playing with Herbie Hancock in the early seventies. His incisive playing on Hancock’s “Actual Proof” garnered him an international cult following and influenced generations of drummers.

New Orleans born saxophonist Donald Harrison is a musician/composer who master musicians consider a master of every era of jazz, soul, funk, and a composer of orchestral classical music. He is also a genius, according to geniuses like Eddie Palmieri and Mike Clark. In the HBO drama Treme, Emmy winning director David Simon created two characters to portray how Harrison innovated new styles of music. This talented artist is the recognized Big Chief of Congo Square in Afro-New Orleans culture and was made a Chief in 2019 by Queen Diambi Kabatusuila in the Democratic Republic of Congo, Africa.

Harrison honed his experience playing with Roy Haynes, Art Blakey, Eddie Palmieri, Dr. John, Lena Horne, McCoy Tyner, Dr. Eddie Henderson, Miles Davis, Ron Carter, Billy Cobham, Chuck Loeb, Dr. Lonnie Smith, Digable Planets, Guru’s Jazzmatazz, The Headhunters, The Chicago Symphony Orchestra, and The Notorious BIG. He has performed with over 200 jazz masters and created three influential styles of jazz. At the age of nineteen, Harrison created a modern jazz take on the New Orleans second-line tradition and introduced his composition New York Second-Line to the jazz world in 1979. By the mid-’80s, he created Nouveau Swing, a distinctive sound that blended the swing beat of modern jazz with hip-hop, funk, and soul music. In the ’90s, Harrison recorded hits in the smooth jazz genre. He began exploring music through the lens of quantum physics in 2000. With quantum jazz, Harrison heard how to move music from a two-dimensional state into a four-dimensional state. Harrison has been a mentor to artist as diverse as The Notorious Big, Jonathon Batiste, Christian Scott, Trombone Shorty, and Esperanza Spaulding.

Kendall Carter is a Louisville, KY native who began playing the piano at the age of 4. Being reared in the church, helped develop him into the consummate musician he is today. He is a graduate of the University of Louisville, Jamey Aebersold Studies Jazz Program where he received his Bachelor of Music in Jazz Performance and his Master of Music in Composition and Arranging. While at UofL he studied composition & arranging with Dr. Gabriel Evens, John LaBarbera, and Dr. Allison Ogden; and piano with Chris Fitzgerald & Jim Connerley.

During his collegiate studies and since, he has had the opportunity to perform with Tim Warfield, Carl Allen, Dave Stryker, Carmen Bradford, Greg Abate & many others. As an educator he provides private lessons, masterclasses, and can be seen every summer on faculty at the Jamey Aebersold Summer Jazz Worskshop. He endorses and is a Hammond Artist, primarily using the Hammond Sk-2 and A100 model organs.