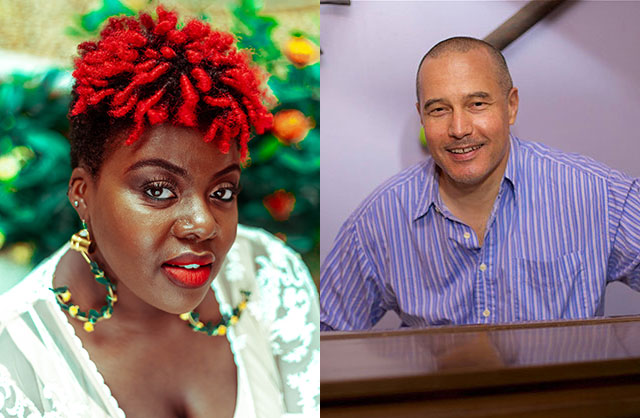 Shacara Rogers is a vocalist, songwriter, and vocal coach from Philadelphia, Pennsylvania. She graduated with her Bachelor of Music and Master of Music Degrees from Howard University. She had been a lead soloist of Afro Blue, Howard's premier vocal jazz ensemble, and has performed at many different arenas with artists like Patti LaBelle,
Dianne Reeves, Esperanza Spalding, and many others. In 2018 she released her debut album, 16 Moments, and became an internationally acclaimed artist with her first 4 week tour of Russia in 2019. Her most current releases of 2020 include a single called As A Woman, and a full length album entitled B Natural Health and Wellness (Healing Music). Over the last six years, this wife and mother has won many awards, released two full length albums, two singles, a music video, become an
international performing artist, served five years teaching on the collegiate level, and started a business. Her future plans include dedicating her musical gifts back to her Lord and savior and releasing her first Christ-center album.  https://www.shacararogers.com

Chris Grasso is a Washington, D.C.-based jazz pianist who specializes in working with vocalists. Chris has performed with Keter Betts, Carmen Bradford, Kenny Garrett, Nicole Henry, Buck Hill, Marlon and Stephanie Jordan, Nicki Parrott, Ken Peplowski, Bucky Pizzarelli, Chuck Redd, Joshua Redman, Avery Sharpe, Suede, Denise Thimes, Frank Vignola, Bobby Watson, Cassandra Wilson, Matt Wilson and more. He has appeared at leading venues including Jazz at Lincoln Center, the Kennedy Center, Blues Alley, Bohemian Caverns, the Iridium, the Metropolitan Room, and the Music Center at Strathmore, as well as festivals in the U.S. and overseas. Chris serves as Music Director for D.C.'s most in-demand jazz singer, the incomparable Sharón Clark. They have appeared together on many stages, from the National Mall to the Kennedy Center, and have received rave reviews from the New York Times, Wall Street Journal and JazzTimes. Prior to pursuing a career in jazz, Chris studied classical piano at the Peabody Conservatory in Baltimore and the University of Michigan, Ann Arbor, where he earned a Bachelor of Musical Arts degree and won the university's concerto competition. He also placed third in the National Chopin Competition and has appeared as a concerto soloist with the University of Michigan Philharmonic and the Syracuse Symphony. After college, he took an eight-year break from music, working as a journalist, earning a law degree from the University of California-Berkeley and practicing law in Washington D.C. For more information, visit www.chrisgrassomusic.com.