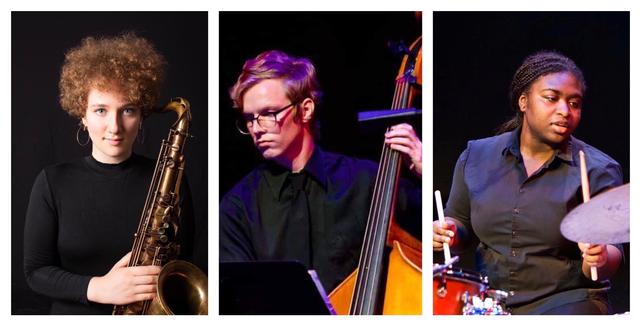 Noah Nipp is an active jazz bassist and teacher in the DMV area. Since first picking up the electric bass when he was 13 years old, Noah has spent his time playing in church bands and in 2017 began playing professionally. He was raised in the city of Newport News, Va, but moved to Fairfax  in 2017 to begin his studies at George Mason University.

Under the direction of Professor Regan Brough, bassist of the Army Blues, Noah made his way into some of GMU's top ensembles. At Mason, Noah has performed in the Mason Jazz Ensemble, the Latin American Ensemble, the Mason Jazz Vocal Ensemble rhythm section, Mason Symphony Orchestra, the Jazz Workshop band, Jazz Combos, and the Green Machine.

In the last 2 years, Noah has been performing in jazz combos all over the DMV area through an organization called Mason Music Productions. Through this organization, he's been able to play for corporate events, retirement homes, school events, and for city events professionally on a regular basis. Noah has also had the pleasure of performing in masterclasses with Gilad Hekselman, and with Stockton Helbing of the Universityof North Texas. Additionally, Noah commonly works with the Eli Lev Collective and other local musicians in jazz, blues, church music, rock, and bluegrass genres.

As a band leader, Noah is performing with his trio and duo at venues such as Chloez Cafe, The Old Firestation,  and Epicure Cafe. Noah is also an active educator in the area. Aside from teaching privately from his home, he teaches st School Of Rock in Haymarket, Va.