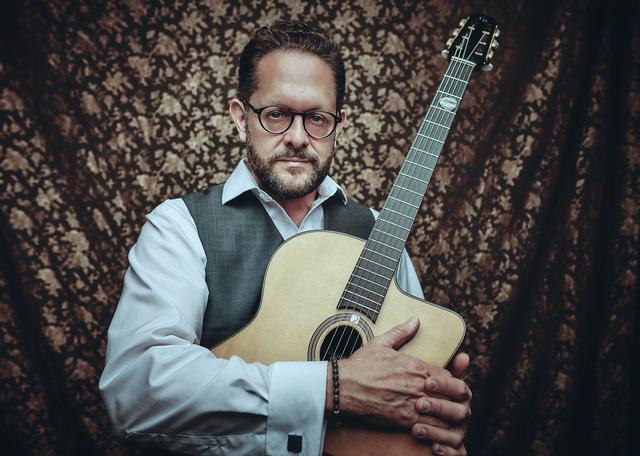 Inspired by the legendary Django Reinhardt, guitarist Michael Joseph Harris recently released Tangent, his fourth album of original music. His efforts have yielded rave reviews internationally and numerous invitations to perform in the U,S. and abroad.

One of the world’s most prolific composers of Gypsy jazz, the Baltimore bandleader is known to stretch the boundaries of the genre. His music encompasses elements of folk, world, and jazz and the new sound appeals to listeners who enjoy fast picking, solid melodies, irresistible rhythms, and exciting solos. Says popular Canadian journalist Raul da Gama, “One can’t help but wonder what this prodigiously gifted musician will do next!?”

With Ultrafaux (and his more traditional group Hot Club of Baltimore), Harris has appeared in concert halls, clubs and festivals such as Festival Django Reinhardt in France, Preston Jazz and Improvisation Festival in England, Djangoary Soiree Festival in Virginia, Django by the Sea in Maine, Midwest Gypsy Swing Festival, and Charm City Django Jazz Festival. (He is artistic director and founder of the latter event.) Reaching new audiences with his expanded sound, he and Ultrafaux were featured at Charm City Bluegrass Festival and the Folk Alliance International 2020 conference.

Ultrafaux comes in many shapes and sizes from trio to large ensemble and every performance offers something new. What remains constant is a high level of artistry and innovation. This riveting performance will feature four versatile players, each a gifted artist in their own right. They include rhythm guitarist Kristoffer Belgica, acoustic bassist Shawn Simon and Russian violinist Nataly Merezhuk.

Listeners will enjoy originals from the hot new album along with tunes from earlier recordings. Album highlights include “Jaguar,” a swing tune in D minor which Harris calls “a kind of homage to traditional Gypsy jazz” and “Dame Ivre.” With that composition, Harris creates the mixture of awkwardness and elegance that the title (“Drunk Lady”) might suggest.

The program also includes covers by familiar names such as Charles Trenet, Duke Ellington, and (of course!) Django Reinhardt. Even ardent music lovers may be surprised at new inclusions by Henry Salvador and Tchan Tchou Vidal. Most will recognize “Sweet Georgia Brown” and “Claire de lune,” but sweet surprises are always in store with this band. WTMD’s Sam Sessa advises, “Just when you think you've got this band pegged, they surprise you. This is some of their most adventurous and beguiling music yet.”