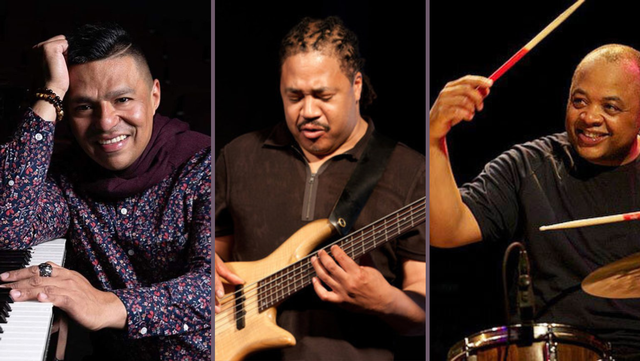 Pianist Benito Gonzalez “Two times Grammy nominee”is an internationally beloved artist who combines a long lineage of American jazz traditions with rhythms from around the world. He’s worked with dozens of the greats, and he always brings some of the best rhythm section players in the world.

Today a rising tide of young jazz pianists are attempting to find their distinct voices by taking cues from their elders. But only a few take their artistry beyond their predecessors to make bold 88-key statements on their journeys to new vistas, fresh sounds, inspired expressions. That personal-touch devotion to the wonders of the instrument brings with it a certitude of intuitive creativity.

That fortitude fuels Benito Gonzalez, an exhilarating pianist who won the 2005 Great America Jazz Piano Competition and was honored in 2020 to be a Steinway & Sons artist for “his sound [that] is recognizable for the powerful rhythm section and Afro-Latin patterns he prioritizes across his projects.” The Venezuela-born, New York-based artist grew up playing traditional Venezuelan folk music with his family before absorbing the inventiveness of such pianists as Herbie Hancock, McCoy Tyner,Chick Corea and Keith  Jarrett who inspired him to join in the explorations on the instrument.

Gonzalez made his way to U.S. by a serendipitous route when an American cultural ambassador caught one of his trio gigs and later invited him to come to Washington, D.C. He was enlisted to play shows with Ghanaian master drummer Okyerema Asante that led to a recording. “After my first six months here, I decided to stay in this country to learn the music right,” Gonzalez said.

Gonzalez went on to play with Jackie McLean in 2003, then joined Kenny Garrett’s quartet for seven years until 2013—during which time he garnered two Grammy band nominations. After his stint with Garrett, he played with saxophonist Azar Lawrence’s band and then in 2019 joined saxophone legend Pharoah Sanders as his pianist/musical director.

Gonzalez also recorded his own albums, including Starting Point (2004) and Circles (2010), then continued his solo career with Dream Rhapsody (2015) with Slavic flutist/vocalist Sisa Michalidesová, and a loving tribute to McCoy Tyner Passion Reverence Transcendence (2018).

With propulsive pulse and Afro-Latin percussive drive, Gonzalez placed rhythm at the core of 2021’s Sing to the World, his fifth album and first released on the St. Petersburg, Russia label Rainy Days Records. He assembled an impressive team of collaborators, including Christian McBride, Essiet Okon Essiet, Jeff “Tain” Watts, and Nicholas Payton as well as rising stars Russian drummer Sasha Mashin, trumpeter Josh Evans and saxophonist Makar Kashitsyn. In addition to his slow-to-upbeat originals, Gonzalez added to the set list two compositions that had never been recorded by their composers: Roy Hargrove’s soulful “Father” and the “Tain” beauty “416.”