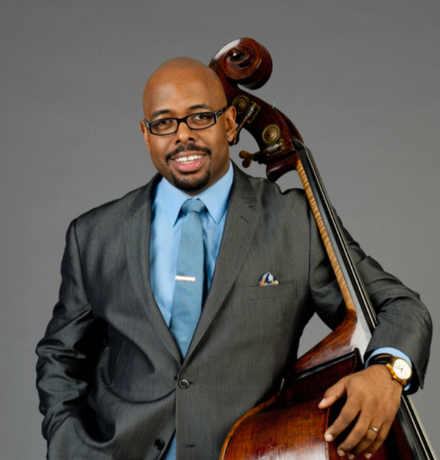 Bassist extraodinaire, composer, arranger, educator, curator and administrator, Christian McBride, has been one of the most important and most omnipresent figures in the jazz world for 20 years.  With a list of growing accolades including his recent appointment as Artistic Director at the Newport Jazz Festival, hosting shows on SiriusXM (“The Lowdown: Conversations with Christian”) and NPR (“Jazz Night in America,” as well as frequent online contributions to various programs including “All Things Considered”), speaking engagements, and occasional DJ performances under the alias DJ Brother Mister, he’s more than just a bandleader: Christian McBride is transcending that title to something more complete.

Beginning in 1989, this Philadelphia-born bassist moved to New York City to further his classical studies at the Juilliard School, only to be snatched up by alto saxophonist Bobby Watson. Since then, McBride's list of accomplishments has been nothing short of staggering. As a sideman in the jazz world alone, he's worked with the best of the very best -- Freddie Hubbard, Sonny Rollins, J.J. Johnson, Ray Brown, Milt Jackson, McCoy Tyner, Roy Haynes, Chick Corea, Herbie Hancock and Pat Metheny. In the R&B world, he's not only played with, but also arranged for Isaac Hayes, Chaka Khan, Natalie Cole, Lalah Hathaway, and the one and only Godfather of Soul himself, James Brown. In the pop/rock world, he's extensively collaborated with Sting, Carly Simon, Don Henley, and Bruce Hornsby. In the hip-hop/neo-soul world, he's collaborated with The Roots, D'Angelo, and Queen Latifah. In many other specialty projects, he's worked closely with opera legend Kathleen Battle, bass virtuoso Edgar Meyer, the Shanghai Quartet and the Sonus Quartet.

10PM / $45 Postponded to March 11-13, 2021
*Please note:
1. Final sale, no refunds, not transferable.
2. $12 food/beverage minimum per person not included in ticket price.
3. Seating first come at the door. Doors open at the earliest of 6 PM & 9:45 PM respectively.
4. Photography or Recording of any kind is prohibited during the performance.
5. Keep conversation to a minimum during the performance.