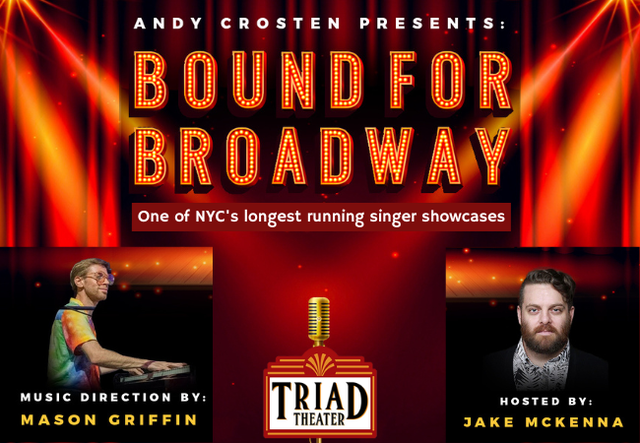 The return of New York City’s longest running singers showcase!  Founded in 2009 by Forslund Theatricals, Bound For Broadway opened at The Duplex where it had four successful years before heading uptown to The West End Lounge where it played until 2020.  B4B has long been a staple of the NYC nightlife scene.  Over the years, more than 4,000 singers have graced the stage, many in their New York debut.  B4B alumni have gone onto lead successful careers in all factors of the entertainment industry.

Now following the pandemic, B4B has found a new home at the Triad Theater, the famed Off-Broadway venue on the Upper West Side.  The production reunites the show’s long standing team of emcee Jacob Mckenna and music director Mason Griffin with new producer, Andy Crosten.  Andy has been a member of the NYC theater and cabaret community for a decade as a performer, drag artist, and now booker/producer.

The show will follow a similar format as in previous years, which features an eclectic array of exciting and diverse up-and-coming singers performing their best show-stopping numbers!  New to the line-up will be special guest stars from the Broadway stage who will headline the evening.