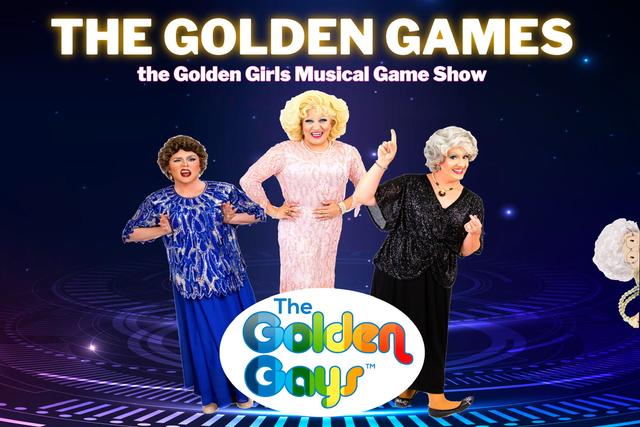 Sophia Petrillo has gone missing!  Your favorite pals and confidants Dorothy, Blanche, and Rose must travel down the road and back again to the Big Potato to find her.  The hip old grannies take you on a musical journey through The Golden Girls’ favorite game shows!  Put on your trivia caps because lucky audience members will become contestants, interacting directly with your bosom buddies, while competing to become the next #TokenSophia. Grab That Dough! Love Connection! Jeopardy Dream Sequences!

"No matter how bad things get, remember these sage words: You’re old, you sag, get over it." Sophia Petrillo

The Golden Gays™ (GGTM) are the premier Golden Girls Musical Troupe touring the US and beyond. The perfect drag show for the whole family! The Golden Gays™ burst onto the scene in 2017- first at RuPaul’s DragCon NYC, then at the famed Rue La Rue Café, where their trivia show video went viral. What began as a flash mob has now skyrocketed to sold-out engagements all across America. They have multiple hit musical shows: “Hot Flashbacks,” “The Golden Games,” “Thank YULE For Being A Friend,” Ring Ring! - It’s the Libertine Belle, Murder Musical” and “Betty & Bea Against Humanity!“

Starring Jason B. Schmidt (as The Dorothy), Gerry Mastrolia (as The Rose), Christopher Eklund (as The Blanche) and YOU as the #TokenSophia! A musical adventure, their shows consist of live singing and dancing, along with hilarious bits from the television show's most memorable moments.