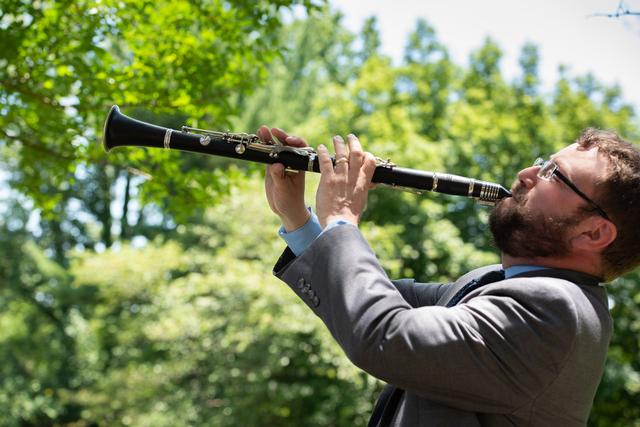 Join us Friday June 18 at 7pm  join us for another LIVESTREAM ONLY concert beamed direct from The Mainstay to your home! $10 streaming pass.

The Seth Kibel Trio will entertain and delight with a program focused on upbeat klezmer music (Eastern-European Jewish folk music) along with some detours into jazz, swing, and the Great American Songbook.  Expect a lively evening suitable for dancing, listening, or just forgetting your cares for a spell.

Seth Kibel is one of the Mid-Atlantic’s premier woodwind specialists, working with some of the best bands in klezmer, jazz, swing, and more.  Wowing audiences on clarinet, saxophone, and flute, Seth has made a name for himself in the Washington/Baltimore region, and beyond. He is the featured performer with The Kleztet, Bay Jazz Project, Music Pilgrim Trio, The Natty Beaux, and more.  Winner of 28 Washington Area Music Awards (Wammies), including “Best World Music Instrumentalist” (2003-11) and “Best Jazz Instrumentalist” (2005, 2007-8, 2011-14). His most recent recording, "When You're Smiling," was released in 2018 on the Azalea City Recordings record label.  His song "New Waltz" was the Grand Prize winner of 2016 Mid-Atlantic Song Contest (MASC), sponsored by the Songwriters' Association of Washington (SAW).

This a LIVESTREAM ONLY event. You will receive a confirmation email. The link in your confirmation will go live 30 minutes before the concert begins.