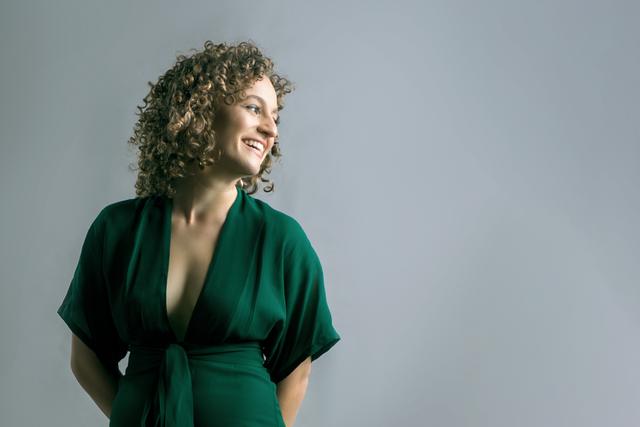 This month we present an Oakland-based, but DC area native vocalist, Danielle Wertz.
Described as, ";untarnished by the politics of music" (Jazz Music Archives) and "at home
alongside more contemporary exponents of improvising singing" (LoudMouth, AU)
Danielle rapidly gained national acclaim after being named a semi-finalist in the 2015
Thelonious Monk International Jazz Vocals Competition and runner-up in the 2017 Ella
Fitzgerald Jazz Vocal Competition.
In 2017 Danielle independently released her debut album, Intertwined. This
collaboration with Israeli pianist, Tal Cohen, was recorded at ABC Studios in Sydney,
Australia, and features renowned tenor saxophonist, Jamie Oehlers. Intertwined ranked
#4 on Capital Bop's list of "Best DC Jazz Albums of 2017" and has continued to receive
high praise since its release.
Being a DC-area native, Danielle has both headlined and supported local musicians at
Blues Alley, The Smithsonian American Art Museum, Mr. Henry’s, Twins Jazz, Sotto,
The DC Jazz Festival, The Mansion at Strathmore, HR-57 Center for the Preservation
of Jazz and Blues, The Carlyle Club, The Creative Cauldron and Bethesda Blues and
Jazz. She released her debut album to a sold-out room at The Arts Barn in
Gaithersburg, co-led a concert with Lena Seikaly celebrating women in jazz at the
Smithsonian American Art Museum in conjunction with the “Harlem Heroes” exhibit in
2017, and was featured on another Smithsonian concert performing “Rare and Never
Recorded Works of Tadd Dameron.”
After relocating to California, Danielle quickly gained recognition as one of the Bay
Area’s most in-demand jazz vocalists. She is thrilled to be returning to DC for this
performance and will be joined by Mark G. Meadows on piano. (Bass and drums TBD)
"Unlike many of her contemporaries there is truth in her voice.
Untarnished by the politics of music, what's brought forth is pure, innocent and simply
beautiful."
-Carmel DeSoto, Jazz Music Archives
"A MASTERFUL BALLAD INTERPRETER [...]
A SINGER WORTHY OF WIDER RECOGNITION"
-KEN DRYDEN, THE NEW YORK CITY JAZZ RECORD

Get Tickets Doors open at 6pm show begins at 8pm. PROOF OF COVID VACCINATION IS REQUIRED.For our live music on Saturday nights we do have a food & beverage Minimum of $15 in addition to the ticket price. Seating Policy: Ticketholders are seated on as they arrive per the floorplan determined by management ahead of time. Performance area is on our second floor, accessible only by a steep set of stairs.