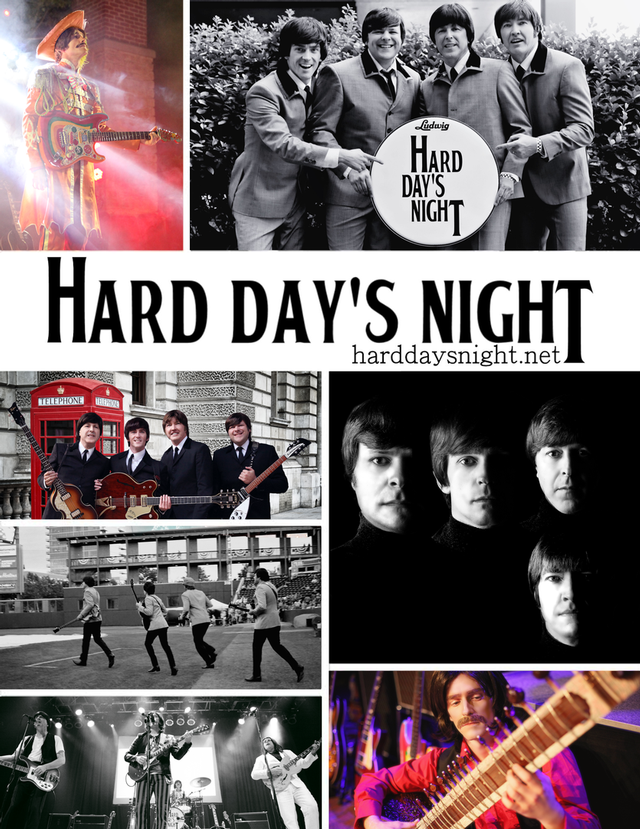 For over 20 years, Hard Day's Night has been entertaining Beatles fans across the country. The group is one of the few touring Beatles tribute bands that, through its musical talent and dedication to authenticity, was invited to perform at the world-famous Cavern Club - the birthplace of the Beatles - in Liverpool, England for International Beatles Week. This included a special appearance with Pete Best, the Beatles' first drummer, at the Casbah Club.

Hard Day's Night is rated as the top national Beatles tribute group performing today, and is dedicated to the Beatles' touring performance standard of playing without recordings or click tracks. The band performs songs from the 1962-1966 era exactly as the Beatles themselves did: four musicians onstage, in character as John, Paul, George, and Ringo, wearing perfect stitch-for-stitch replications of the suits made famous by the Beatles, with authentic Vox, Hofner, Gretsch, Rickenbacker, and Ludwig instruments, playing the world-famous songs note-for-note.

Hard Day’s Night has performed for thousands of Beatles fans in England and the United States, including hundreds of performing arts centers, festivals, and corporate clients including Continental Airlines, Hard Rock Cafe, Hilton Hotels, Volkswagen of America, and the American Heart Association. Television clips featuring the band have appeared on FOX, PBS and CBS, and the group has appeared with such noted British Invasion performers as Peter Noone and Herman's Hermits and Billy J. Kramer, as well as Tim Piper, national John Lennon entertainer.

Hard Day's Night will continue to carry on the original excitement of Beatlemania because audiences will always demand to see the number one rock 'n roll group of all time - the Beatles - perform live onstage. Hard Day's Night recreates that exciting vision by performing the magical music of the Fab Four, in one of the most authentic, all-live stage tributes to the Beatles seen today!