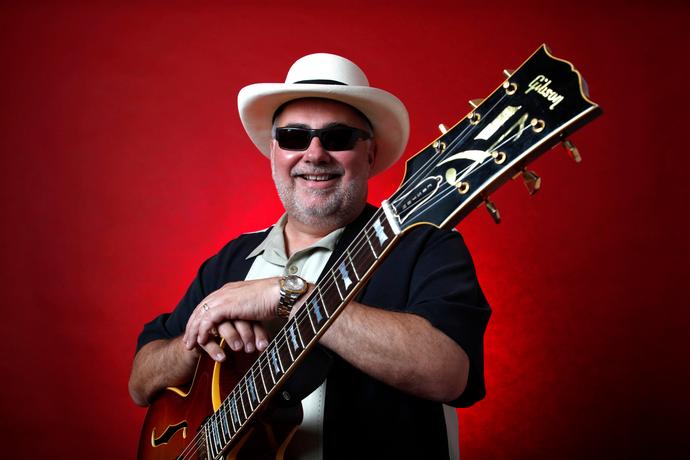 Whether it's a song, a style, an idiom or an image, Duke Robillard will render it with mastery, power, nuance and an unerring grasp of its essence.  Born Michael John Robillard on October 4, 1948, in Woonsocket, R.I., Duke has carved out one of blues' most illustrious legacies, while also trodding some lofty related territories as a guitarist, vocalist, songwriter, bandleader, studio sideman, producer, label operator and educator.

After showing an early affinity for music and guitar, he founded Roomful Of Blues with pianist Al Copley in Westerly, R.I., in 1967. By adding horns, Roomful announced itself emphatically as the prototypical jump blues band, and became a New England legend and a fixture beyond, as did Duke himself.  By the time Duke left Roomful after a dozen years, he was firmly established in the upper echelon of contemporary blues guitarists.

Duke's resume is decorated with Grammy nominations, Handy Awards and Blues Music Awards, and other honors for his artistry, recordings and productions within the United States and internationally. On his latest release, "Duke Robillard and his Dames of Rhythm" on M.C. Records, he wields an acoustic archtop and joins six thrushes for evocative and enjoyable renditions of 1920s and 1930s swing tunes; it's a worthy successor to his 2016 BMA-winning "The Acoustic Blues And Roots Of Duke Robillard."

Duke remains based in Rhode Island and a whirlwind as a musician, producer, gardener and photographer. But wait, there's more: he's now creating fine art abstract paintings, too! At this point for Duke, versatility and mastery should come as anything but a surprise; it just means more richness in a superlative career for us to celebrate.
by Dick Shurman- Noted blues historian and producer

8PM / $25 Get Tickets
*Please note:
1. Final sale, no refunds, not transferable.
2. $12 food/beverage minimum per person not included in ticket price.
3. Seating first come at the door. Doors open at the earliest of 6 PM & 9:45 PM respectively.
4. Photography or Recording of any kind is prohibited during the performance.
5. Keep conversation to a minimum during the performance.