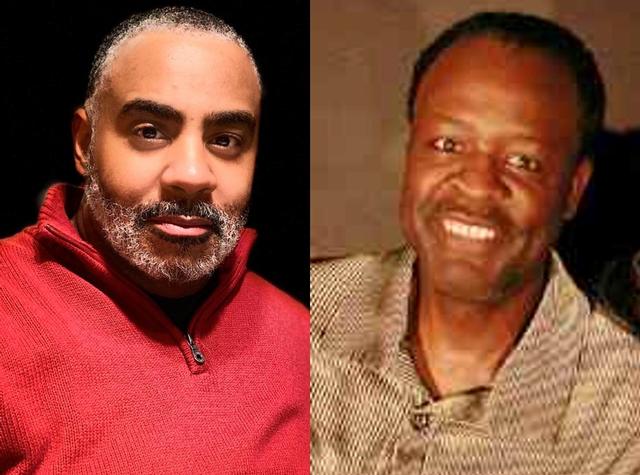 Gerald Skillern, born in New York City, was brought to Cleveland by his parents, a
“bapticostal” Sunday morning soprano from Savannah, GA and a soldier-musician who played
seven brass instruments, upright bass and bass guitar. Gerald was raised in a household that
echoed light rock, gospel, soul, R&B and more! His father could be heard practicing all genres
of music, which rubbed off on Gerald. His mother sings in her church and a community choirs -
giving him a love for choral music.

His multifaceted musical background allows him to be versatile in his approach to how he sings.
Currently, Gerald attends South Euclid United Church of Christ as a choir and praise team
member. Gerald has performed at Nighttown and the Bop Stop. He also has sung background
vocals on projects by Darren Thomas and Eddie Howard and has more than 20 years of choral directing experience.

Dave Thomas is a most talented piano and organ player. A native of Youngstown, Ohio, Thomas was an original member of the R&B group, "Sweet Thunder". He has also performed with numerous artists including the late James Cleveland, Dizzy Gillespie, Albert Ayler, Jean Carn, David Ruffin, and Grover Washington. His musical involvement also includes musical theater as a writer, performer, and musical director in performances such as "The Living Cross," "The Audition," and "Black Nativity," which have played throughout the United States and Canada. He is also a gifted educator, having worked at The Cleveland School of the Arts, Cuyahoga Community College, Cleveland State University, and Case Western Reserve University. He is the co-author of a book entitled, "A Child's First Book of Spirituals," which is the recipient of the Coretta Scott King Award.

Presently, Dave is a music teacher with the Cleveland Board of Education School District, Musical Staff member of The Southeast Seventh Day Adventist, Faculty member of The Cleveland State University, and Minister of Music at St. Timothy Baptist Church. He earned his undergraduate and graduate Music degrees from Cleveland State, Cleveland Institute of Music, Case Western Reserve University, and postgraduate work at the Royal Holloway College in London, England.