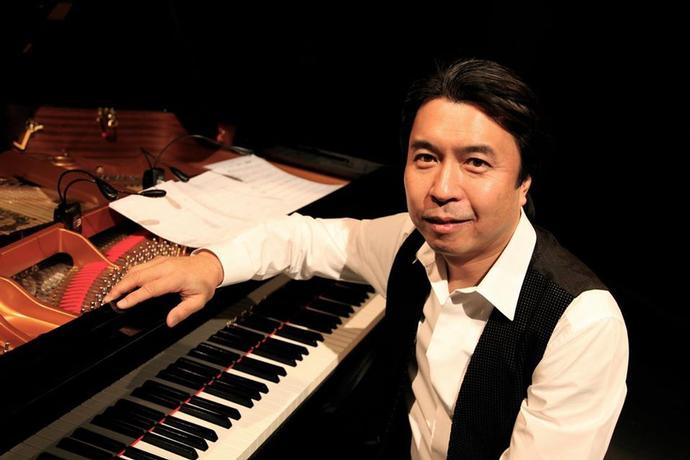 Ozone grew up in Kobe, Japan, eschewing classical piano lessons in his youth, opting for a life in jazz. The road he’s traveled, however, has now brought him to a point where he has become a celebrated pianist in both jazz and classical music. Lately he has been reexaming his journey. “The more I talk about my life, the more I see that I had no plan or vision,” he says. “I am an improviser.”

During the early 1980s, Ozone became a globe-trotting jazz composer, pianist, and recording artist. He’s toured and recorded with fellow pianist Chick Corea, clarinetist Paquito D’Rivera, vibraphonist Gary Burton ’62, and saxophonist Michael Brecker, among countless other A-listers. He’s released about 30 albums as the primary artist and composer in solo, duo, trio, and other settings. He has also appeared as a sideman on dozens more jazz recordings.

Whether he’s playing jazz or classical repertoire, it’s apparent to listeners that Ozone is deep inside the music, transported to some other place. His facial expressions and body movements convey a sense of wonder at where the music is taking him. As a pianist, Ozone has something to say. He is authentic in his approach to whatever music he’s playing. His desire to communicate with people through notes is paramount. Musical styles appear as new vistas rather than barriers. In Ozone’s big musical tent, it’s all just music.

8PM / $40 Show Postponed - New Date TBA
*Please note:
1. Final sale, no refunds, not transferable.
2. $12 food/beverage minimum per person not included in ticket price.
3. Seating first come at the door. Doors open at the earliest of 6 PM & 9:45 PM respectively.
4. Photography or Recording of any kind is prohibited during the performance.
5. Keep conversation to a minimum during the performance.