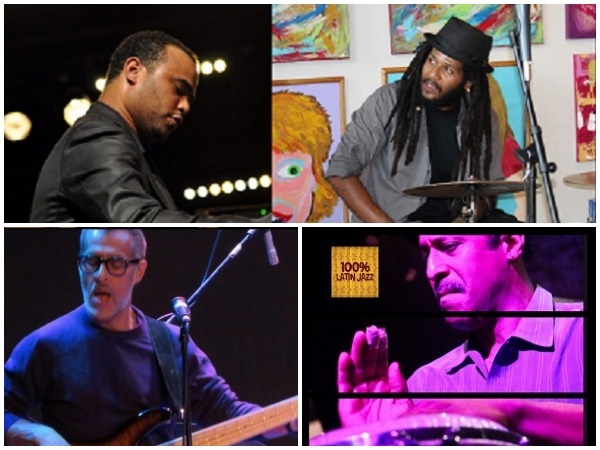 AN DIE MUSIK LIVE PRESENTS: A YEAR OF LATIN JAZZ AND DANCE WITH
JOEL SANTIAGO AND “CUABA”
A one year residency of a unique Latin jazz and dance experience

The live Latin Jazz experience the city has been waiting for!

The concert series will include local Latin jazz percussion legends and many more guest features from around Latin America.

Tabitha Hitchye owner of D:ance and Expressions Studio and the Director of Baltimore Salsa Dance Company will instruct a dance class prior ot the concert at 7 p.m..

Joel Santiago is a lifetime musician who grew up in Maryland. He attended the Duke Ellington School for the Arts, and has been playing in the jazz circuit since he was 15 years old. Besides drum set, Joel has dedicated himself to the Latin percussion tradition and history in studying the orchestra of Latin percussion and traditional African instruments. Besides being a Berklee student, Joel has also been under the tutelage of such masters such as Carlos Caro, Alfredo Mojica and René Ibañez. He has performed everywhere from the Filmore, and Keystone Korner, to UMD, MSU and internationally at venues such as Jazz Villiage in Ethiopia. Some of the people he has worked with include Jorga Mesfin, Benito Gonzalez, Proyecto Piquite and Roots Radics among many more.

Bienvenido Dinsey is a Latin Grammy award winning jazz pianist and a Yamaha certified instructor who has been active for over a decade. Bienvenido studied jazz piano at both the Conservatory of Music of Puerto Rico and the Conservatory of Music of the Dominican Republic, with a degree in Jazz and Caribbean Music. He also holds a certificate in composition, arrangement and harmony of Jazz, issued by the University Pedro Henríquez Ureña (UNPHU) Santo Domingo. His experience includes groups such as Charlie Sepúlveda, with who he was grammy nominated, and the Turnaround Latin Jazz Group with a Latin Grammy that same year as a pianist on the album "Tribute to Benny Morel", with Jon Secada. He has also toured with Fidel Morales AfroCuban Jazz Group, and Au Vivo, for whom he was musical director.

Chuco Mendoza's almost 40 years of performance experience includes venues like the Hollywood Bowl, Mexico City's Bellas Artes Palace, its National Auditorium as well as the Metropolitan Theater, to name a few. He has toured across Europe, the U.S. and Latin America with artists like Latin Grammy winner Lila Downs, Tania Libertad, Ricky Martin, Salvador "El Negro" Ojeda, Oscar Chavez, Magneto, among many others. He participates in several ensembles here in the Baltimore Washington region. Working with Joel and Bienvenido, Chuco is the cement that glues together the rhythm and the harmony; collectively their sound is fierce and bold and is as unique as each member of the trio.

Rene Ibañez is a very well known Cuban percussionist and band leader in the DMV, who has performed with artist of all genres of music locally and abroad for the past 30 + years. The rhythm of his swing will have you up and dancing! His roots are deep in Cuban music and in DC's broader music scene. Rene has performed with such icons such as Cuban pianist Chuchito Valdes, Benito Gonzlez and many more.

Tabitha Hitchye is co-founder of Baltimore Salsa Dance Company and director of Dance and Expressions studio in Baltimore, Maryland. Raised as the daughter of a musician, she was exposed to the music industry as a young child and at the age of 19 she was introduced to Latin Dance which turned into a love and passion for her. Latin dance & music inspired her to become a dance instructor in order to share the love of dance with others. She has been teaching Salsa, Mambo, Bachata, & Flamenco for a combination of 11 years and dancing for 20 years.