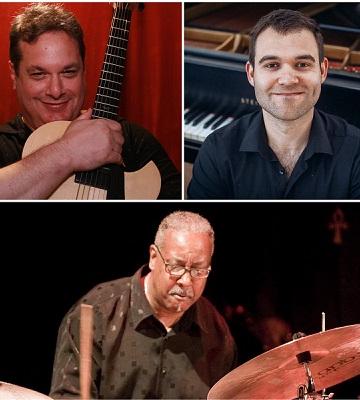 Skip Grasso is guitarist, composer, and educator based in Baltimore. His 2021 release Jagged Spaces with the Grasso-Ravita Jazz Ensemble reached #31 on the JazzWeek chart. This recording of all original music featured four of his compositions, including the title track. As a sideman, Skip recorded The Don Junker Big Band’s Junkyard Dog, and The Hank Levy Alumni Band’s An Odd-Time Was Had By All. He has performed with such artists as Randy Brecker and The Lakewood Jazz Ensemble Big Band, singer Ethel Ennis, and saxophonists Chris Vadala, and Claire Daley.

In 1986, Skip was awarded a B.S. in Jazz/Commercial Music from Towson State University, and then received a Master of Music from the University of North Texas in 1997. He studied privately with guitarist Paul Bolleback as well as theory and ear training with Dr. Asher Zlotnik whose teaching incorporated Joseph Schillinger’s compositional method. In 1996 at the suggestion of guitarist Mike Stern, Skip began studying with renowned jazz educator Charlie Banacos until his death in 2008. He has continued studying with pianist Garry Dial, the authorized teacher of the Banacos method.

Skip taught guitar as an adjunct professor at Mount Saint Mary’s University, and he currently teaches privately. Skip had two books of guitar transcriptions published, Vital Blues Guitar: Freddie King (2003) and Vital Blues Guitar: Gatemouth Brown (2000). He was a recipient of the 2022 Pathways to Jazz Grant.

Anthony Pocetti is originally from Hamilton, New Jersey, and began studying with jazz pianist and composer Jim Ridl at age 14. He received his Bachelor of Music degree in Jazz Piano Performance from NYU in 2011, where he studied with such renowned musicians as Don Friedman, Jean Michel Pilc, Gil Goldstein, Kenny Werner, Andy Milne, Rich Shemaria, Billy Drummond, Mike Richmond, and others. He went on to study at the Manhattan School of Music with Ted Rosenthal, where he received his Master of Music degree in Jazz Piano Performance in 2013. Pocetti has performed at such prestigious jazz clubs as The Blue Note, The Iridium, Smalls Jazz Club, Chris’ Jazz Cafe, and Blues Alley. Pocetti has proudly served as pianist for the Jazz Ambassadors since 2018.

Get Access to the Live Stream After your purchase, you will receive a confirmation message FROM INSTANTSEATS. The message contains a link to the concert event page. The page will now display a countdown clock until the live concert link is revealed, 15 minutes prior to showtime.