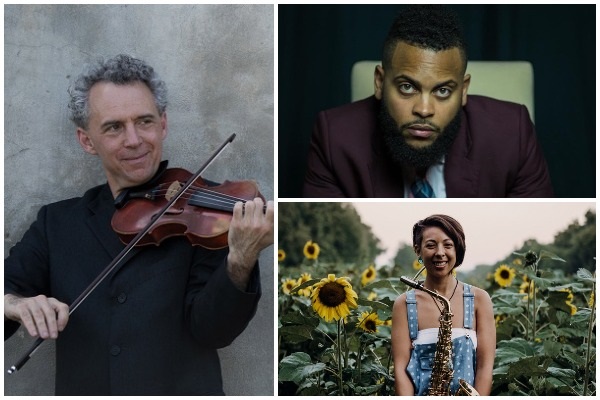 One of the most sought after musicians in the DC area, bassist Romeir Mendez has performed at Carnegie Hall and The Walt Disney Theater, and currently tours with triple-Grammy-nominee Sweet Honey In The Rock. Romeir also performs with world-renowned artists such as Donald Harrison, Warren Wolf, Tim Warfield, Terell Stafford, Jeff “Tain” Watts, Regina Carter, and Terence Blanchard. A native of Baltimore, his touring career has taken him around the world, playing venues in Qatar, Japan, Dubai, Jamaica, Australia, South Africa, Swaziland and Peru. Romeir continues to perform nationally and abroad, and occasionally leads his own band at venues around Washington and Baltimore.

Sarah Marie Hughes:was named top alto saxophonist at the 2017 Jazzie awards, and The Washington Post has described her playing as “certainly one of the most inspiring nights of music this reviewer has witnessed.” She is primarily a free improviser who creates within and on top of many genre frameworks including but not limited to jazz, experimental, swing, blues, folk, pop, and rock. Sarah has performed with superb improvisors and composers such as: Lee Konitz, Mary Halvorson, Fay Victor, Allison Miller, and Teddy Charles.

By turns nocturnal, funky, and cinematic, the music of violinist and composer David Schulman has been called “mysterious and beautiful” by the Washington Post.

David wrote and recorded the theme music for NPR's "The Big Listen” and NBC's "So You Wanna Be President" with Chris Matthews. David's album ANHINGA was described by World Music Report as “exceptionally lyrical...a vivid slice of life that traverses the musical topography of the Americas."

A 2018 Music Fellow of ART OMI, David in 2019 launched the ARTSOUNDS series in collaboration with the HIrshhorn Museum, improvising live scores to exhibits by renowned contemporary artists. More at quietlifemotel.com.