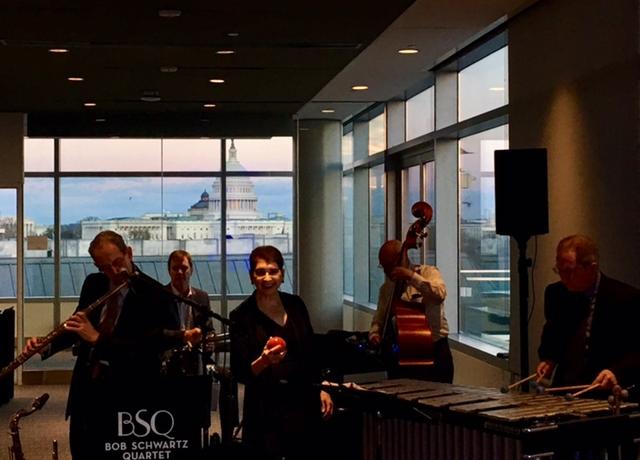 “… Two albums, a whole lot of elegant, straight-ahead jazz. Bob Schwartz is an impressive presence on the bandstand; his improvisation has the feeling of a lively raconteur, spinning yarns with witty asides and amusing details. He and the band have a special affection for playing standards that have fallen out of the usual rotation…”
Michael J. West, Washington City Paper, February 12, 2015

Bob Schwartz started playing flute at age 8, went on to win Mozart solo competitions, study at Berklee College of Music, star on saxophone, write widely admired jazz compositions and arrangements, and play professionally with future stars David Berger and Andy LaVerne. After coming to DC to join the Justice Dept., Bob kept playing and writing songs, even as he went on to represent major technology companies and trade associations.

BSQ debuted its second CD, Look For The Silver Lining, at Twins Jazz in 2013 and has been featured regularly here ever since. The emphasis is on bop and swing, lesser known and public domain standards in each genre, and Bob’s original compositions. BSQ performs throughout DC, Maryland, and Virginia and has been featured several times in Las Vegas.