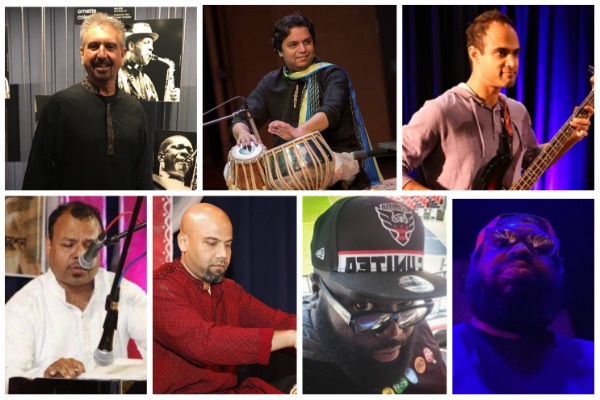 RNL is a hip hop artist from Washington D.C. known for his freestyle abilities and improvisation skills, earning him the nickname "1000 bars." He has performed across the U.S. and Europe and is a member of The Far Exp, a group that has also contributed to his business acumen and venture capital endeavors. In addition to his music career, RNL is involved in community radio and is developing curriculum for D.C. Public Schools that focuses on arts and entrepreneurship.

Hailing from Nashville, and now residing in Washington, DC, Ardamus has become a hip hop veteran in the DMV scene. Starting at the age of 8 with rapping, he developed his talents over a number of years being influenced by a rap's greatest hits tape his sister let him borrow. After high school. Ardamus moved to Washington, DC where he developed skills as a lyricist and attended Howard University for a Bachelor's of Science in Anthropology. After getting a feel for the city and the music scene, he got involved with non-profit organizations that incorporated arts with commentaries on social justice and local hip hop battles in the community. Now the Wammie nominated hip hop artist has worked so hard to the point where he has shared the stage with such acts as Souls Of Mischief, Myka Nyne, 2Mex, Blue Sky Black Death, Ceschi, Phife Dog, Blu & Exile, and many others. He is in two bands and various hip hop groups to working on collaborative efforts with the NIH and 202 Creates.

In-person: $25/$10 full-time students with valid ID
Attendees receive link to the recording to view for one week.

Advance sales end 1 hr before showtime; tickets can be purchased at the door if any remain.

Streaming Cost: $15
Link will be revealed 15 minutes prior to show
and will remain active through Feb. 11

Greg Hatza is a masterful keyboard and piano player who is highly regarded in the jazz music community. He has numerous jazz music releases and has performed on stages all around the world. In addition to his expertise in jazz, Hatza has also dedicated over 20 years to studying Indian classical music. Together with Enayet Hossain, Hatza has formed the Indo/Jazz fusion group Melodic Intersect, which has released six studio albums. The group has achieved great success, including a sold-out performance at [email protected] Lincoln Center in New York. Hatza's ability to innovate within his own genre and his versatility in performing across different styles make him one of the most respected musicians in the world today.

Enayet Hossain is a renowned Indian classical percussionist who has released over 50 albums and has had the opportunity to perform with some of the most renowned musicians in India. In addition to his work in Indian classical music, Hossain is also known for his fusion music, which he has explored through his group Melodic Intersect, formed with Greg Hatza. This group has received widespread critical acclaim and has had multiple chart-topping hits on radio stations in the United States. Hossain's versatility in both Indian classical and fusion music has been recognized globally, and all eight of his world-fusion albums have been included in Grammy ballots every year since their release for nomination.

Pravin Rao is a multifaceted individual with a passion for both medicine and music. In addition to being a highly skilled and dedicated doctor, he holds a degree in western instruments and has extensive experience as a musician. As a singer and proficient guitarist and bass player, he has performed with numerous bands and has a true talent for bringing music to life. Despite his demanding work schedule, Pravin remains dedicated to honing his skills as a musician and continues to find ways to incorporate his love of music into his busy life.

Collins Gomes is a highly skilled vocalist with over 20 years of experience studying Indian classical music. He has performed on stages around the world and is well-versed in a range of sub-genres within Indian music, including classical vocal, ghazal, thumri, Bengali folk, and pop. His expertise in such a diverse range of styles makes him a rare and talented vocalist.

Patrick Gomes is a highly accomplished percussionist who has dedicated over 20 years to studying the Indian percussion instrument. He has performed in numerous concerts and is known for his versatility in playing across a range of genres, including world music, Indian classical music, ghazal, thumri, and folk. Gomes' ability to adapt to different styles and his expertise in the Indian percussion instrument make him a rare and talented musician.